Changing hidden settings is a concept that is bound to attract any techie, no matter how mundane the settings might actually be. That’s because the basic idea of playing around with something that’s otherwise inaccessible is catchy to the geeky mind, and the challenge that it poses is sure to intrigue. For smartphones and tablets, this applies even more, because these are devices that we almost invariably use on a daily basis, and like to carry with us at all times.

For Samsung’s devices, there are certain CSC files in the system that allow you to change a lot in the system, like shutter sounds, automatic backups, infinite scroll and much much more. These have been always of particular interest to developers and advanced users, and a lot of CSC editors have popped up time to time for specific devices to make these changes. Now, for Samsung’s latest flagships, Galaxy S4 and the Galaxy Note 2, one XDA member has come up with a dedicated app labeled Note 2 Hidden Settings, which allows you to play around with CSC files for these devices and make changes accordingly. 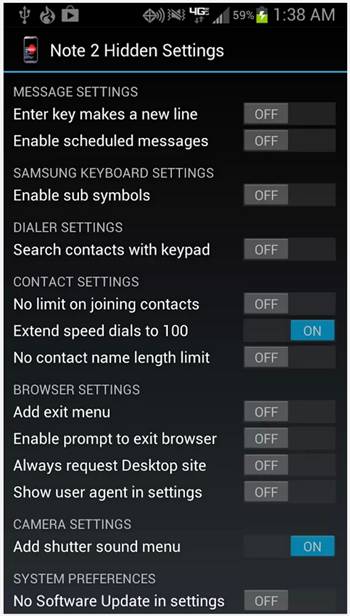 The app basically allows you to change settings like turning shutter sound on and off for the camera, enabling infinite scroll on the launcher and app drawer, extending the limit on merged contacts and more. Then, the app adds more niceties to the mix, through its ability to display which settings are already enabled and in place, creating an automatic backup of the changes that you have made, giving a Holo-themed interface, compatibility with TouchWiz based custom ROMs thanks to its support for XML files, and more. The settings are divided into categories such as dialer settings, browser settings, message settings, camera settings etc., to help you differentiate between what exists where.

There are certain limitations to Note II Hidden Settings, as you’d expect from any such app. For one, it requires root, and while it’s almost absolutely pretty sure to have root access these days, you’ll be out of luck if you haven’t done that. Then, the compatibility doesn’t exist with AOSP-based ROMs, because there is no CSC file to play around with. 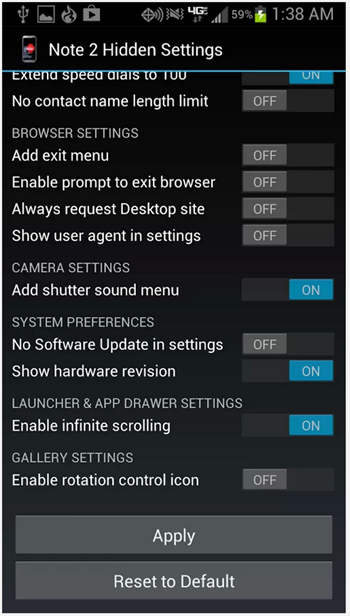 The app is available for free at Google Play Store, and while primary designed for Galaxy Note II, works fine on Galaxy S IV as well. It might support other Samsung devices as well, but since none has been tested officially, we cannot vouch for that.

(Download: Note 2 Hidden Settings for Android on the Play Store)