Many movie-goers, particularly those rushing out to see Ashton Kutcher’s best Steve Jobs impersonation, have been reporting of seeing ads for the all-new Mac Pro while waiting for their film to begin, and now Apple has uploaded the clip to YouTube. Much has been made of the radical redesign, with Apple also very keen to point out that the machine is built entirely in the United States, and if you were impressed with the unveiling, you’ll surely be left drooling at this new clip.

There’s no doubt that the Mac Pro, with its sleek, black design, is one cool customer. But as many veterans of the Mac Pro have pointed out, the scope for expansion is far more limited than ever before, with some questioning whether it can even be classed as a Pro machine any more. Certainly, those who have decried the Mac Pro as something of a supercharged Mac Mini may be slightly downplaying the sheer power of this beast of beasts, but you can certainly see where they’re coming from. 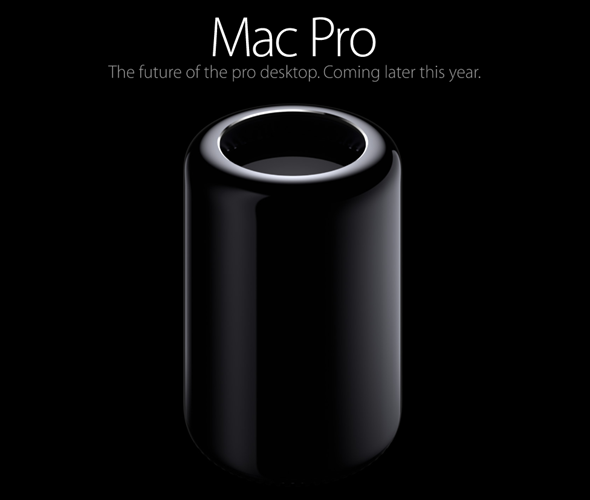 With the new advertisement now up on YouTube, you don’t have to take a trip down to the movies to catch it, but while the main attraction to the Mac Pro has to be its almost endless show reel of hardware features, the clip simply focuses on the design. With small glimpses of the top and sides in various different lights, it’s about as much of a tease as a teaser trailer can get, and even though the Mac Pro only serves a small faction of the Apple community, it certainly appeals to the inner-geek of many more.

The price point of the Mac Pro has yet to be disclosed, but if you are considering making the purchase, you’re going to need fairly expansive wallet – preferably one without a bottom. In terms of availability, Apple told the world at WWDC that it would be available to purchase this Fall, and unfortunately, the video clip sheds no further light on that initial projection.

With that said, reports floating about recently have indicated that the Mac Pro could be set for a November release, so if you’re in the market for a ridiculously powerful Mac, you mightn’t have to wait for too long.