Samsung has, after much wait, finally announced its Galaxy S4 handset, and if the HTC One lit the blue touch-paper for an old-fashioned slog in the battle for Android supremacy, the Korean giant has responded in its usual efficient fashion. Most of the features we suspected prior to the announcement eventually materialized, including the 1080p 5-inch display, 2GB of RAM and quad-core processor, but there were also one or two surprises in store. We’ve got every inch of the announcement covered after the break! 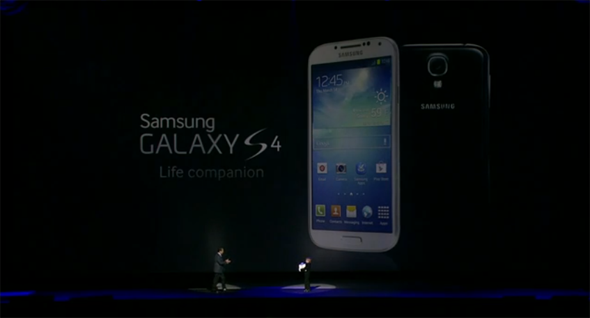 Although the Galaxy S4 is enveloped in yet another polycarbonate fascia, it’s easily the best looking Galaxy handset to date, and those in ownership of the S III or Note (II) will surely be sold by the aesthetics of this brand-new device.

Samsung claims the 130g device is “slimmer, lighter and more solid” than any other Galaxy ever released. Measuring at 69.8mm x 136.6mm x 7.9mm, it should be rather easy to squirrel away into the pocket, and although the S III was by no means a bulky handset, Samsung has certainly outdone itself here.

As far as colors go, it comes in “White Frost” and “Black Mist”, with Pebble Blue having been dropped, if only temporarily. 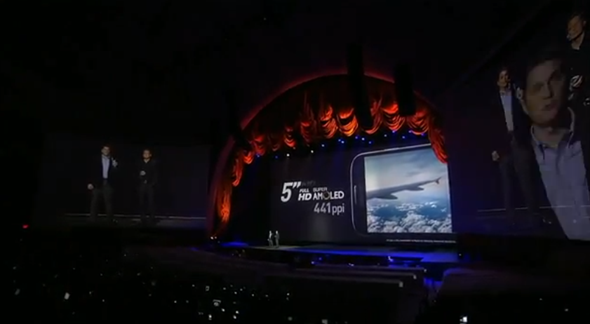 It has long since been rumored that a 1080p display would grace Samsung’s 2013 flagship, and so it has proved. The diameter of the new screen spans an impressive 5 inches, offering a whopping 441 dpi. It’s described as a “Full HD Super AMOLED display”, with “less to hold, and more to see.” Another interesting feature which really caught our eye was Adapt Display, which smartly adjusts the screen tone to match the surroundings for lesser eye strain. 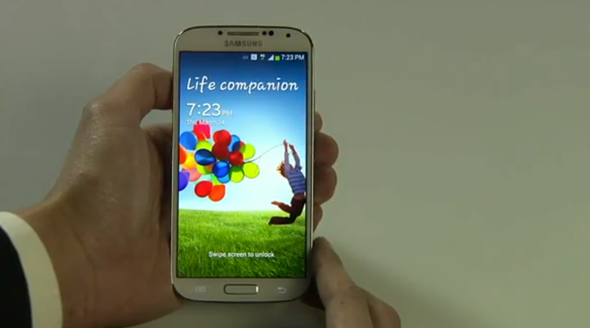 Samsung has surely put in a lot of effort in terms of display, and display quality. With an amazing feature which Samsung is dubbing as Air Gesture, you can use hand gestures to change tracks, flick through photos and whatnot. Apart from that, Samsung has also introduced Air View with the Galaxy S4, which allows the user to hover their finger above content to get a quick sneak preview, this is something which works great with mail and photo galleries.

There’s a 1.9GHz quad-core processor and 2GB of LP DDR3 RAM. Interestingly, there are eight sensors altogether, including the all-new infrared gesture, temperature, and humidity.

Taking things one step further, Samsung has done a great job in revamping the hardware this time around. With amazing features like Screen Mirroring, Samsung Smart Pause (which lets you pause video when you look away from the screen), Smart Scroll (which lets you scroll through pages by simply titling your device).

Ticking on top of that great hardware is the latest and greatest Android 4.2.2 Jelly Bean, and on top of that is, you’ve guessed it, Samsung’s own TouchWiz UI. 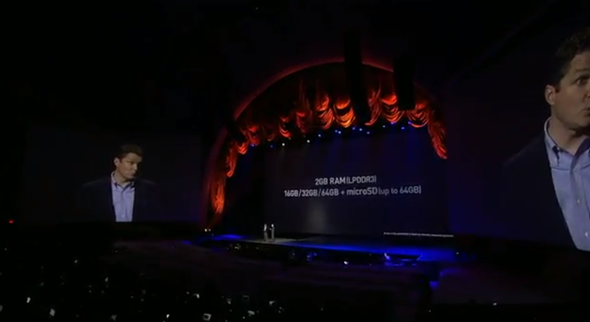 The Galaxy S4 ships with either 16, 32 or 64GB of storage, all of which are expandable by means of microSD. microSD support goes all the way to 64GB, which means 128GB of storage in total if you opt for the high-end model.

The Galaxy S4 will ship 3G and 4G LTE models from the get-go as you would expect, with global LTE roaming also a pretty standard feature. 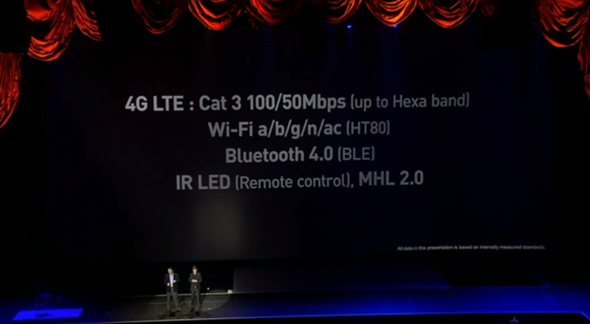 Wi-Fi connectivity looks mightily impressive, offering a/b/g/n/ac (HT80). The mighty feature of the S4 is 4G LTE, which now supports download speeds of up to 100 Mbps, and upload speeds of 50 Mbps. So, pretty decent and mighty connectivity from the get-go!

Bluetooth 4.0, NFC, GPS are also present under the hood. It’s safe to assume from this point onwards that these features come as standard. 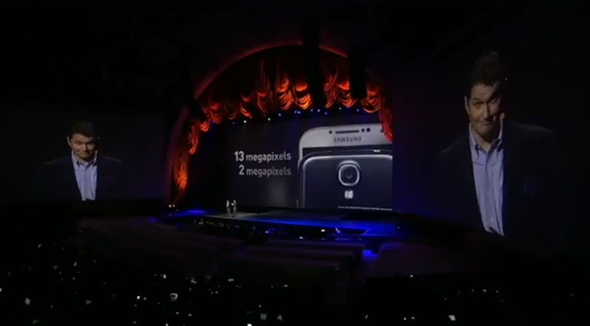 The Galaxy S4 features a 13-megapixel camera, with a whole bunch of accompanying features besides. Samsung has really gone to town in helping photo and video aficionados have a great time with the Galaxy S4. For example, the camera’s Drama Shot feature is capable of snapping an incredible 100 shots every 4 seconds, from which you can select the very best shot to lock away for safe-keeping.

The front-facing camera is a 2-megapixel affair, and both the front and rear snappers can be used at the same time. 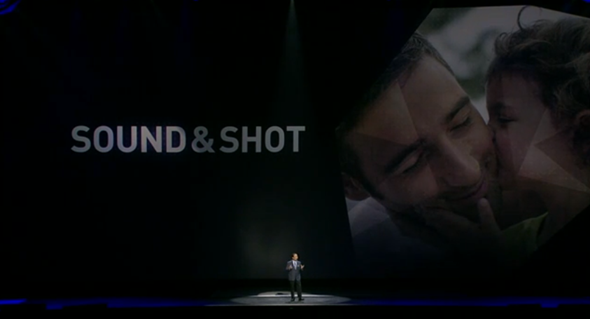 Samsung has also deemed it necessary to introduce Sound and Shot, a new implementation which allows you to record five seconds of audio before taking a shot. It’s for those instances which don’t necessarily warrant a video, but could do with a little additional scene-setting. As described by Samsung, “it’s like adding another dimension of detail to the memory you’re creating."

Another cool camera feature which users will find interesting is Eraser, which from its name, as you expect lets you remove people in shots who might be “interrupting” your oh-so marvelous photo.

As you’d expect, standard features which tag along a new smartphone release are there; such as HDR (High Dynamic Range) mode, panorama shot, sports mode, face detection and more.

There’s no point in packing a device with a deluge of top-end hardware without affording it a sufficient battery to keep things ticking over. Thankfully, the powerhouse Galaxy S4’s battery would seem more than up to the job, with Samsung including an impressive 2,600 mAh battery.

It’s safe to say that Samsung has really went that extra mile when it comes to features, it’s packed to the rafters with small features which make it a superb device to keep in your hand/pocket.

S Translator lets you translate different languages on the fly, and oh, did we mention that it’s all voice? Yup. Apart from S Translator, the S4 also doubles up as an optical reader, which also translates text on the fly to any other language, and lets you search for information in a snap. Keep in mind that language support is limited and it’s highly likely that it might vary by region when the S4 hits the shelves.

Group Play is another feature which really caught our attention. Wouldn’t it be great if you could pair up to 8 S4 devices together to make the ultimate sound system? With the S4, you can. How about sharing documents? Done. How about games too? Yup, that is thrown into the mix as well. And did we also mention that it doesn’t require a wireless router to do its magic?

Apart from Adapt Display, Samsung has also thrown Adapt Sound into the mix, which, just like its display counterpart, adjusts the volume and tone to an optimum level for the user’s comfort.

Samsung Hub is still there in the S4, which lets you download the latest content to your smartphone in a breeze. Games, movies, music etc. are on offer, nothing new. ChatON, as you’d expect is ticking under the hood to keep those IMs flowing through, with support for voice and video calls, screen sharing, and support for 3-way calling. Amazing stuff.

Another cool feature is Samsung WatchON, which transforms your smartphone into an intelligent IR remote, through which you can control your TV, set-top box, DVD player, and if you’re so lucky; an air conditioner.

A great product is not complete without great accessories, right? And in typical Samsung fashion, the Korean giant hasn’t disappointed this time around either. With many accessories on offer, and more coming soon (obviously), lets go through the key ones.

If you’re a gamer, and love to get in grips with your favorite title, then Samsung has you covered with their wireless gamepad accessory. From its name, it’s pretty much obvious how it connects to your S4, but the cool part is; it’s a full-blown hardware gamepad, a perfect companion for gamers who are looking to take their gaming experience one notch further.

The S Health software also saw some limelight during the presentation, and Samsung has announced the S Band and the Body Scale accessories to compliment it. Both of them connect to the device via the S Health app and tracks your fitness once everything has been synced. Perfect for those who are striving to keep in shape. The Body Scale lets you, well, keep track of your weight, whilst the S Band is a calorie tracker, much like the Nike+ FuelBand.

Wireless charging is there, as expected, the leaks have been right, with support for the Qi wireless standard. The device sits on top of a sleek looking pad, and the rest is all wireless magic, or wire-free charging, as some might want to call it.

Cases are probably the most common form of accessory known to anyone, so yes, Samsung will be officially making cases for the Galaxy S4. The flip case, which we’re accustomed to seeing on the Galaxy Note and the S III is making another round, this time for the 5-inch 1080p gracing beauty. A perfect accessory to get your hands on first if you want to keep your device from those nasty dings or scratches from day to day use.

Samsung hasn’t announced official pricing for Galaxy S4 yet, but said that it will cost around same as that of any previous flagship Samsung smartphone.