RIP Google.cn, This Is How It Last Looked Like

After all the dispute blazing up between Google and the Chinese Government, Google has finally decided to shutdown its Chinese search engine Google.cn and redirect all it’s traffic to Google Hong Kong. The news has been confirmed by Google on their official Google blog. 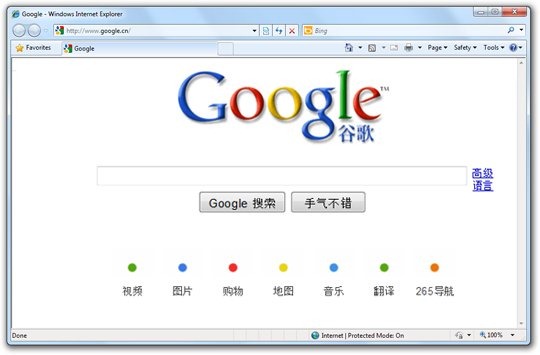 It all started off with a situation when cyber attacks were committed on Google which originated from China. Google took many steps to overcome the situation but ultimately they decided on shutting it down as the talks between the two parties failed to find a suitable solution.

Due to heavy traffic on Google Hong Kong’s website, users will see a slight degradation in performance and in some cases some of the products and services will remain inaccessible for some time being as Google is working on switching everything over to other servers.

Figuring out how to make good on our promise to stop censoring search on Google.cn has been hard. We want as many people in the world as possible to have access to our services, including users in mainland China, yet the Chinese government has been crystal clear throughout our discussions that self-censorship is a non-negotiable legal requirement. We believe this new approach of providing uncensored search in simplified Chinese from Google.com.hk is a sensible solution to the challenges we’ve faced—it’s entirely legal and will meaningfully increase access to information for people in China.

All we can do is hope that Google and the Chinese finds a peaceful way out of this rather than holding Google’s workers responsible for the whole situation unfolding at this very moment.

we would like to make clear that all these decisions have been driven and implemented by our executives in the United States, and that none of our employees in China can, or should, be held responsible for them. Despite all the uncertainty and difficulties they have faced since we made our announcement in January, they have continued to focus on serving our Chinese users and customers. We are immensely proud of them.

To recap on what happened, it was December last year when the Google – China relations took a bad turn. Someone from China targeted human right activists Gmail accounts. These Google human rights activists accounts in China were hacked by hackers who originated from mainland China. As a reaction, the dismayed authorities at Google threatened to withdraw its services from China, saying that it can no longer censor its search results on the Chinese version of Google homepage i.e. Google.cn. Google, in a detailed blog post said that if it is unable to find a way to operate an unfiltered search engine within the Chinese law, which currently requires it to block access to millions of websites, it will have no option but to close its operations in China. Few days later, Google-China debacle took a new turn when Google in a secret counter-offensive encounter managed to hack these Chinese hackers back. It was successful in breaking into the source computer in Taiwan which was involved in these attacks. Google engineers, thus found out some evidence which were pointing fingers towards mainland China. It appeared as if the whole script was orchestrated by the Chinese government. Later in a new development, U.S. authorities were able to track down the man who wrote the code to attack Google in China. The guy in question was a freelance security consultant in China, and his discovery made it even more difficult for the Chinese government to deny their involvement.

In mid last month, some more scary details came to light where linkage of two Chinese Institutions were discovered in hacking Google sites. These schools were also reported having tacit connections with PLA.

Google also delayed the launch of two Android based smartphones from Motorola and Samsung, and didn’t plan to unveil Nexus One in China.

Our complete coverage on this Google – China saga can be found here. [via The Official Google Blog]