After the targeted cyber attacks on human right activists Gmail accounts that originated in China, the dismayed authorities at Google has threatened to withdraw its services from China, saying that it can no longer censor its search results on the Chinese version of Google homepage i.e. Google.cn. Google, in a detailed blog post said that if it is unable to find a way to operate an unfiltered search engine within the Chinese law, which currently requires it to block access to millions of websites, it will have no option but to close its operations in China. 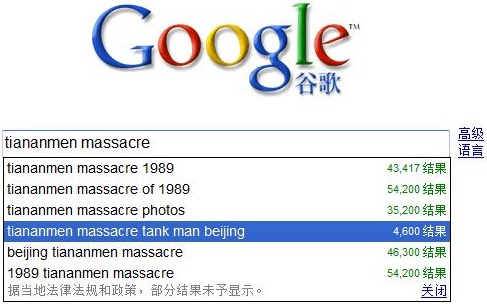 Search results for "Tiananmen massacre", which were earlier censored by Google have now been uncensored on Google.cn

China’s strict censorship policy on Internet and other media in the garb of curbing pornography or violent content, is basically aimed to restrict human rights activists to ingress into Chinese minds. Some critics also allege that the so-called "Great Firewall of China" is designed to curb the spread of political content that is considered a threat to Communist Party rule in Beijing.

The statement from the Google on the occasion says:

We have taken the unusual step of sharing information about these attacks with a broad audience not just because of the security and human rights implications of what we have unearthed, but also because this information goes to the heart of a much bigger global debate about freedom of speech.

… We have decided we are no longer willing to continue censoring our results on Google.cn, and so over the next few weeks we will be discussing with the Chinese government the basis on which we could operate an unfiltered search engine within the law, if at all. We recognize that this may well mean having to shut down Google.cn, and potentially our offices in China.

Google further explained that, when the site was set up in 2006, the benefits to Chinese people of increased access to information and a more open internet outweighed their reluctance to censor some results. The move led to waves of criticism that it placed commercial opportunities above its company ethos “to be Good”. However, it seems this could now be reversed as the Internet giant Google said Tuesday it would no longer comply with Chinese rules requiring that it scrub its China search results of information deemed by Beijing to be unacceptable.