Dropbox is Coming Soon to an Android Phone Near You

Dropbox – the highly popular and extremely useful web based file syncing service is coming soon to an Android phone near you. The Dropbox app for Android is expected to be available in the next few months, and is definitely worth a wait. 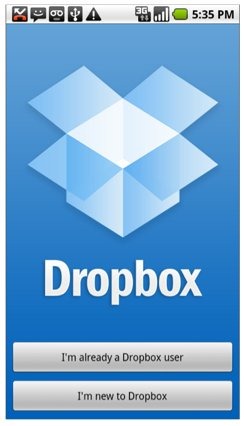 This upcoming Dropbox app for Android will not only allow users to view their files from their phones, but will also support playing multimedia content like music and movies. If user desires, he can store his key documents locally on his Android phone, or on the cloud storage. If a file is edited, as expected, it will automatically sync up with all the linked devices. Users will also be upload new files and share them with friends and family if they like. The app will also be integrated into Android’s system wide ‘Share Via’ menu (my favorite feature of Android!), so that you can immediately upload a photo or video to Dropbox that has just been shot.

Access your Dropbox on the go – All the contents of your Dropbox are available for viewing. You can even stream music and movies in your Dropbox straight to your Android device.

Download files for offline viewing – Add files to ‘Favorites’ and they’ll be accessible at any time.

Upload files and sync them to your Dropbox – Take a photo, shoot a video, or upload some audio from your Android phone and email its public link to a friend in less than a minute.

Dropbox app for iPhone was released back in September 2009. Reportedly, a native BlackBerry app is on the way as well. [via TechCrunch]