At this point, it would be almost impossible to not be acutely aware that a new Samsung flagship is available after both a media blitz and so much talk being centered around whether this will usher in a return to form for the company, finally banishing the memory of the ill-fated Galaxy Note 7. 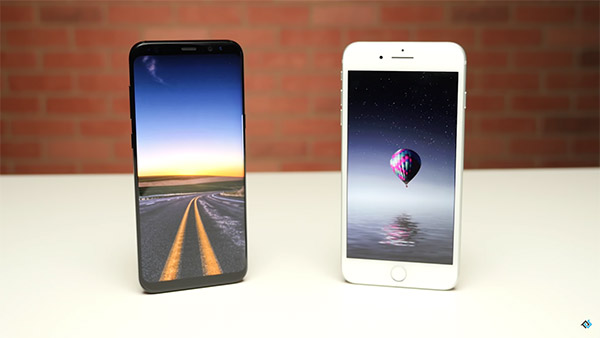 This being Samsung, one of the very few smartphone makers that can compete with Apple these days, there has also been a lot of attention on whether the Galaxy S8 will give the iPhone 7 a run for its money, let alone the iPhone 8 that is expected to be announced later this year.

In order to go some way to answer that question from a pure performance standpoint, YouTuber PhoneBuff has put together a video in which an iPhone 7 Plus is pitted against the new Galaxy S8+ in order to see just how well they stack up against each other as far as outright memory management is concerned.

For those unaware, Samsung’s Galaxy S8+ is powered by the octa-core Qualcomm Snapdragon 835 with 4GB of RAM, while the iPhone 7 Plus has a quad-core Apple A10 Fusion and 3GB of RAM keeping it ticking along very nicely indeed.

The tests carried out involved launching one app after another and timing how long it took to carry out one full “lap.” Afterwards, the same suite of apps was opened again, this time from RAM.

So, with Samsung’s hardware the beefier of the two, does that translate to better performance? Not entirely.

As PhoneBuff’s tests show, the iPhone actually more than holds its own and bests the Galaxy S8+ in many cases, particularly when loading apps directly from RAM rather than having to launch them afresh. The full video is only a few minutes long, so be sure to check it out and form your own opinion on whether this test is a good real-world indicator of performance, and even if it is, whether it is enough to stop the Galaxy S8+ from selling well ahead of the iPhone 8’s launch later this year.