Over the last few months, many current and prospective smartphone users have had their eyes sharply focused on the Samsung Galaxy S4, the Korean company’s new Android smartphone. As expected, the new handset will be available on a wide range of retailers and carriers in the US, Samsung has now confirmed. In addition to major phone carriers, such as AT&T, T-Mobile and Verizon, the handset will also be available from a number of lesser-known networks, namely US Cellular, Cricket and C Spire; as well as a number of retailers such as Best Buy, Radio Shack, Sam’s Club, Staples, Target and Wal-Mart.

Even before launch, the device has been making waves in the industry, many touting it one of the most consumer-friendly Android devices on the market. Although the device was announced last month at a high-profile New York event, little was known about Samsung’s plans for launching it in the US, until a leaked internal Staples memo revealed the company’s strategy and the Galaxy S4 release date. On Tuesday, AT&T was the first company to break the silence by making the device available from its online store, and you can pre-order Galaxy S4 right now. The news today, in a way, is only confirming what we have known for months, yet it is good to see Samsung finally come forward and allowing customers to plan ahead.

Along with the smartphone itself, Samsung is also shipping a number of new accessories. The most interesting of them all is the S View Flip Cover: available in both “black mist” and “white frost” color versions, the Flip Cover is a cover for the Galaxy S4 screen with a small window on the top side. Using the selective capabilities of the device’s AMOLED screen to turn off most of the display, except the section that is not covered. When covered, the phone will display status information, such as a digital clock and email notifications. This new accessory is available for $39.99. 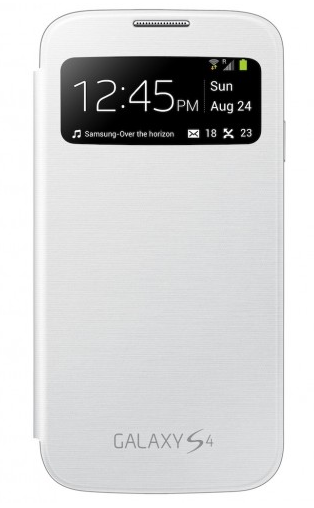 The Samsung Galaxy S4 will also be backwards compatible with Samsung’s existing accessories, including the Smart Dock, previously released specifically for the Galaxy Note II. This means that you will not have to dish out a lot of money on new accessories for your phone.

The Galaxy S 4 is available for pre-order from a number of retailers already, with the wide release availability set for May 3rd.