We love a good concept idea here at Redmond Pie, and with all this incessant talk of an "iPhone 5S" hitting the scene at some point in the near future, the designers have been out in force putting forth their own takes on what kind of form factor the device may eventually employ. But while many are getting understandably carried away with the supposedly imminent seventh-gen handset, the guys over at Aatma Studio have been busy creating an iPhone concept of a different kind.

The company, which tends to concentrate on wowing audiences with its wondrous creativity and stunning visual effects, has done it again, and below you can watch in awe as 10,000 iPhones fall like dominos around a virtual office. 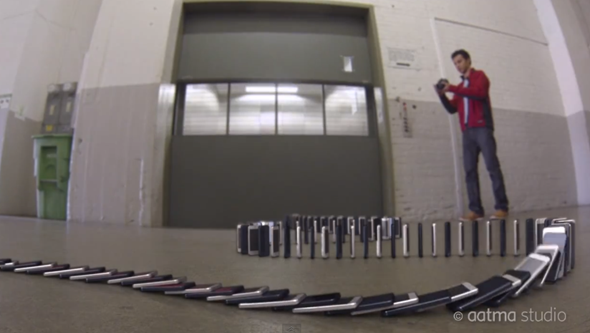 It’s an unorthodox concept, I grant you, but if you caught the epic iPad 3 concept Aatma came up with last year, you’ll know that these guys seldom do things by halves:

The iPhones in the video – unlike the real iPhone 5 – are equipped with NFC, which pass signals onto each other to display the different lighting effects right on cue. With the patterns spiraling in all kinds of directions, the whole spectacle comes together really well, and having seen enough half-baked, blurry, unspecified ‘leaks’ to last me a lifetime, it’s refreshing to see something like this, wouldn’t you agree?

The domino effect spreads in and out of different rooms, riding through numerous potential obstacles including a vertically retracting door and an elevator. It all looks so very real, particularly since real folks are featured in the video, but as the company’s CEO points out, aside from the first iPhone, clip is complete animation:

Except for the first iPhone that is set off, every other phone you see is computer generated.. We modeled, animated and rendered the CG phone where the footage was first motion-tracked and the CG phone was composited over it. 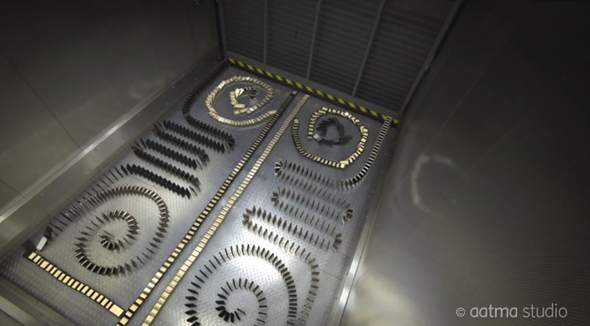 I, for one, think this is pretty darned cool, and although it would be even better had real iPhones been used, the purchase would have cost the company a considerable amount of money. Considering the cost of an iPhone 5 (SIM-free) begins at $649, the company would have to have spent six and a half million dollars to bring this concept to life; but if any of you have that kind of money going spare, we’d love to see somebody make it happen!