There’s been a significant amount of chit-chat regarding third-party mail apps on the iOS App Store. The original pretender to the throne was the Sparrow app that began life on OS X before being migrated across to iOS and then ultimately snapped up by Google who promptly stopped development of the project. We’ve since had the Mailbox app that managed to generate an interest from millions of users, and more recently, we’ve seen the Mail Pilot offering that may cost a lot but also brings a new way of looking at email in a minimalist and clean interface. I’ve attempted to use all of the above mentioned apps as my primary email clients on the iPhone, but always end up falling back on Apple’s native offering on iOS 6.

This post however is not about comparing all these email clients, but rather about a useful feature that I recently came across in the iOS 6’s Mail app. The new Mail app in iOS 6 includes many new hidden gems, one of them is a simple and faster way to access saved Drafts.

In the Mail.app, the bottom right hand corner of the display gives access to the Compose button that allows us to start writing a new email. A normal tap on this option will invoke the New Message composer screen that allows recipients, carbon copies, subject and message body to be included as well as any required attachments.

However, as of iOS 6, if you long tap/press this Compose button, it will take you directly to the Drafts section of the app where you can continue editing or send any previously saved drafts. This minor, yet useful feature, can save you a ton of time if you do a lot of emailing on your mobile. 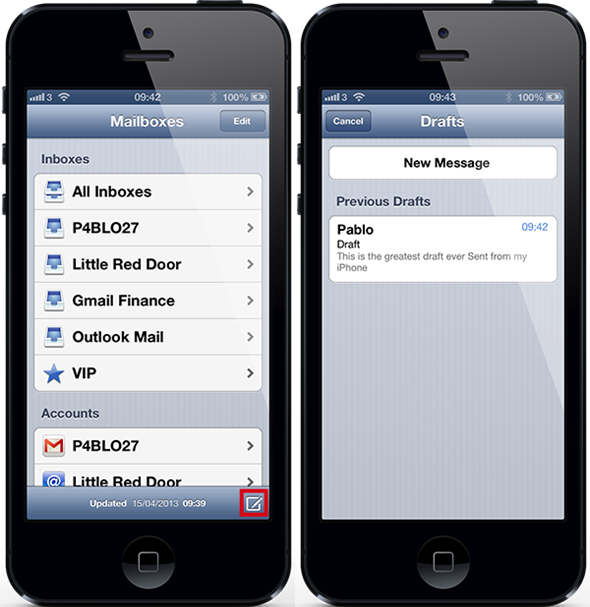 It may not be the most advanced of additions that we have seen added to a new version of iOS, but it definitely shows that engineers at the Cupertino company are always finding new ways to improve the user experience. It also makes us wonder what other little additions have been made that we haven’t discovered, yet.

(Thanks to Karthik for the heads up!)