If you’ve been seeking an alternative to Mail.app — the default iOS mail client — then look no further; the popular Mac email client Sparrow has hit the App Store, and is now available on the iPhone and iPod touch. What’s interesting is how people often haven’t really gone out of their way to find an alternative for Mail.app; it’s strange in some ways that a default, bundled app is the most commonly used email app on iOS considering the vast third-party marketplace. Perhaps Sparrow might just be the app to put a dent into its use.

Priced at the relatively low cost of $2.99, the app offers a multitude of features. To paraphrase the App Store release notes, it will offer full IMAP support (for Gmail/Google Apps, iCloud, Yahoo, AOL, MobileMe, and custom IMAP accounts, but unfortunately not Hotmail as it lacks IMAP support), a unified inbox, thread view, pull to refresh (a la the Twitter and Facebook apps), alias, a mark all as read button, smart contacts, powerful search, and powerful swiping gestures to make navigating through email easily. 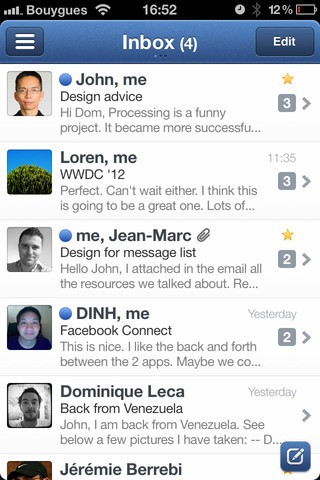 There are a few things that are unfortunately not supported in this release: POP accounts and push notifications are currently unsupported, but they will be added to the app in a future release along with landscape mode, a built-in browser, send and archive tweaks, the ability to list all emails of a label or folder in your inbox, and localization. 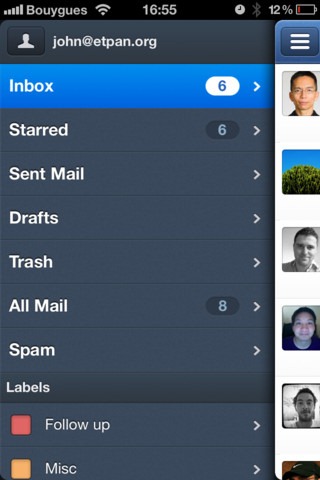 We must remember though, that, after all, that this is the first version of the app to touch down. With a brilliant user experience and a suitable feature set to boot, it’s certainly worth checking out. And users of Sparrow on the desktop are sure to be thrilled that their favorite desktop email client is now available on their mobile phone.

Sparrow for iPhone was originally announced back in August of last year. They also have plans to release an app for the iPad, which we are sure will be out shortly (in full Retina Display glory, to support the new iPad.)