Here’s a Samsung Galaxy Note 8 Vs Apple iPhone 7 Plus performance comparison based on early leaked benchmarks scores of Note 8.

The Android and Samsung-loving world are very excited about what the South Korean business will bring to market with the eventual unveiling of Galaxy Note 8. Last year’s Note 7 model will go down in history as an unmitigated disaster, predominantly due to the fact that it kept exploding and had to go through a total worldwide recall.

However, if Samsung manages to avoid that issue this time around, then a new leak would suggest that it could be one of the most performant smartphones that we’ve ever seen. Most of us are expecting Samsung to come steaming in with the Galaxy Note 8, with the inclusion of an internal specification that should hopefully make it a computing powerhouse and set it apart from anything that we’ve seen hit the market to date.

The company has a fairly decent track record of pushing the boundaries with each new flagship, and given the issues faced with last year’s Note 7, we expect a Note 8 which goes above and beyond in order to recapture that lost audience and restore the damage done to the brand’s reputation. A set of new leaks from a benchmarks test website suggests we won’t be disappointed.

The said benchmarks that have appeared online are carrying the model number SM-N950F, which is what Samsung’s Galaxy Note 8 is believed to feature. These tests don’t exactly give an entirely accurate overview of how the device will perform in the real-world as it is displayed via a well-known HTML5test, which basically measures browser performance, but given that the device running Android 7.1.1 managed to notch up a score of 488 on the test as an overall score, it’s pretty good since Apple’s highly-performant iPhone 7 Plus recorded a score of 417 on the same testing platform. 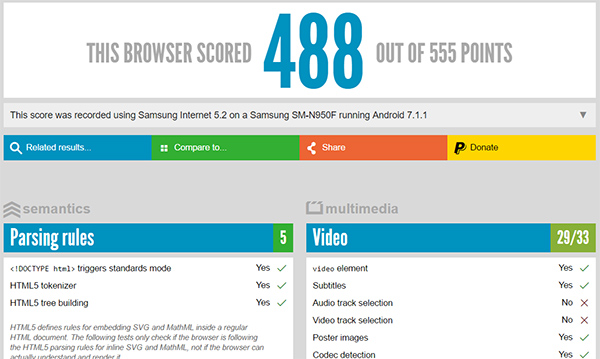 In addition to that impressive performance, when Samsung’s new device is announced this coming August, it is expected to come with a similar design to the smaller S8 model, and with a 6.4-inch Infinity Display which should look sensational on a device of that size with support for S Pen. We should get a Qualcomm Snapdragon 836 processor or Exynos 8895 as well depending on the region, as well as a performant dual-lens camera system.

Not long now until an official announcement, and if we are lucky we could even get a release during the same month.