Excitement levels are at an elevate high at the moment in the jailbreak community. The release of an untethered jailbreak solution for all devices compatible with iOS 9 by the Pangu Team managed to pretty much blindside everyone, but also once again bring jailbreaking to everyone’s attention. No matter what Apple do, those resourceful researchers and developers still manage to find a way around iOS’ security mechanisms. With iOS device owners from all over the world downloading and attempting to jailbreak iOS 9, we’re going to take a look at some of the common issues that could occur and how to rectify them.

Here are some of the known issues as are being voiced by jailbreaking fans across the globe, coupled together with possible solutions. 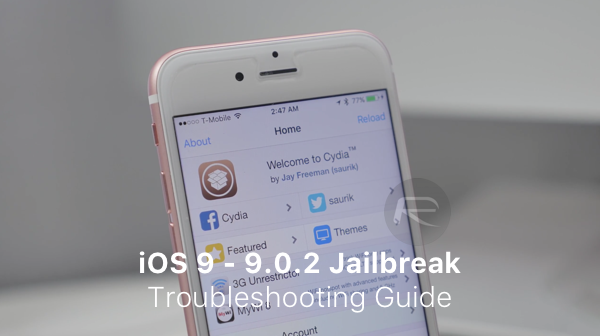 Before checking out the following fixes, make sure you first:

If you have tried all of the above and yet you get errors during or after jailbreak process, try the following fixes.

If you’re getting stuck at 45% during the jailbreak process with Error 0A then you’re going to need to head into iTunes to resolve this one. With the iOS 9 device connected via USB, open iTunes and select the hardware from the bar at the top. Under the “Backups” header, make sure that Encrypt iPhone backup is not checked. Take an unencrypted backup of your device and try the jailbreak process again.

Still getting the same error? Make sure you have enough storage space on your computer’s hard drive. Should be over 10GB.

Update: If what is mentioned above doesn’t help fix error 0A for you, download Pangu 1.0.1 from here and then rejailbreak. Version 1.0.1 includes fix for this problem.

This type of error is enough to terrify the average person attempting to jailbreak their device. The nature of the error makes it look extremely technical and will undoubtedly induce panic. If this particularly error is received as part of your jailbreak journey then the only way to bypass it and resolve the problem is to entirely restore the connected device to iOS 9.0.2 using iTunes and attempt the jailbreak process again. You can get iOS 9.0.2 from here: Download iOS 9.0.2 Links For iPhone, iPad, iPod touch [IPSW].

This one isn’t exactly an error, but it’s enough to mean that you can’t even attempt to jailbreak the device. If this is a problem that’s affecting you, then it is advised to (re)install the latest version of iTunes on your Windows machine and then try to connect your device by USB at least once. You can grab the latest iTunes from here.

If you get “Runtime Error! … This application has requested the Runtime to terminate it in an unusual way …” when running Pangu on Windows, here’s what you need to do: Fix Pangu iOS 9 Jailbreak Runtime Error On Windows, Here’s How.

If the “installed iOS Public Beta Profile” message is being presented as part of the process then you’re going to have to start deleting profiles from the connected device. Open the native Settings app and navigate to General. Select the Profile entry and delete the public beta profile before reattempting the jailbreak process.

Cydia Not Showing Up

If you think everything has gone smoothly, but there’s no Cydia app present on the device then don’t panic. The advice here is to launch the native Photos app within iOS before running the newly installed Pangu application. Exit out of the Photos app, run the new Pangu app and grant access when prompted. Cydia should then show up.

For a fix for this, follow the instructions here: Fix Apple Logo Boot Loop Of Death BLoD On iOS 9 Jailbreak, Here’s How.

Everything seems to have gone smoothly, but then Cydia crashes every time you try to open it. If this is happening to you, follow the instructions here to fix the problem: Fix Cydia Not Opening / Crashing After Pangu 9 Jailbreak [Guide].

Update: PreferenceLoader update is now available which fixes this issue. Grab the update on Cydia.

This one is currently a known issue. PreferenceLoader, which is a small jailbreak utility that allows developers to grant a configuration tab in the native Settings app, has yet to be updated with iOS 9 support. This means that settings and preferences will not show for many installed tweaks, and in some cases certain packages will simply cease to work on iOS 9. This can’t be resolved until PreferenceLoader is updated by the developer. The good news is that the developer is aware of the issue and is working on the update for iOS 9.

WinterBoard is not ready for iOS 9 yet. But there’s way around it to force it to work on iOS 9. Follow the instructions for it here: Fix WinterBoard Not Working On iOS 9 iPhone And iPad, Here’s How.

If you happen to be experiencing issues that aren’t listed here, and the interface doesn’t provide you with any additional information, then it’s likely that your device had the latest version of iOS installed via an over-the-air (OTA) update. OTA updates are known to cause issues with jailbreaks for one reason or another, so the solution here is to entirely restore the device clean to stock iOS 9.0.2 via iTunes. To do this, you can follow our guide here: Download iOS 9, 9.0.2 And Install On iPhone 6, 6 Plus, 5s, 5c, 5, 4S, iPad, iPod touch [Tutorial].

Did the above solutions help fix your problems with Pangu 9 jailbreak? Know a fix that we don’t know of? Share it with us in the comments section below.