Google has taken the opportunity to bring in a little goodness into the lives of Nexus 10 owners by introducing the first official accessory for the 10-inch tablet. To compliment the sleek design of the Nexus 10 the company has seen fit to hit the ground running with a dark grey book type cover that is now available for purchase through the Google Play Store. More details and the purchase link coming up right after the break.

The product listing indicates that the accessory has been designed specifically for the Nexus 10, with Google obviously putting a fair bit of thought into the practicalities involved in using a case of this type with a tablet device. The case itself attaches directly onto the Nexus 10, with one of the most appealing aspects of the product being that it offers an extremely slim and perfectly engineered fit that doesn’t add noticeable bulk to the tablet. 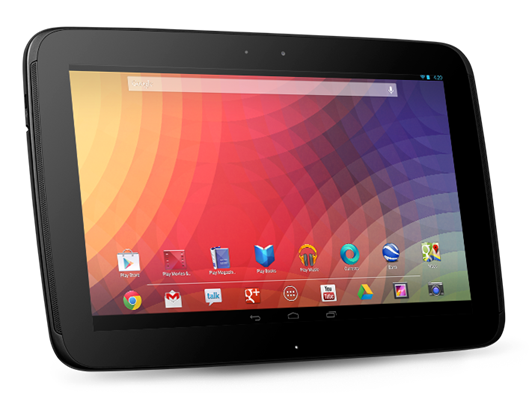 The case certainly can’t be considered as one of the best when it comes to offer all around device protection, but it does offer flawless coverage for the Nexus 10 display as well as looking rather elegant when attached thanks to its rounded corners and premium feeling matte finish. It isn’t just the look and feel of the case that makes it stand out. We are sure that Google themselves will admit that they took a little inspiration from Apple’s Smart Cover, flipping the cover open will wake the device and closing it will put it to sleep instantly.

The launch of the case means that Google has joined Apple and Samsung in offering accessories of this nature that allows users to unlock and lock the device based on adding or removing the cover. The Play Store product listing currently shows that the case will ship within 3 – 5 business days at a cost of $29.99, with Scarlett and Dark Grey variants currently being offered by the Mountain View based company.

It’s immediately evident that Google has put a fair amount of design resources into the production of this great looking cover. The aesthetics and sleek manufacturing are more than complimentary to the overall visuals of the Nexus 10, but it would be great to see the product being possibly offered in a variety of different colors and surface finishes. One of the most appealing aspects of the original Apple Smart Cover was the fact that it was launched in multiple color options with two different finishes on varying pricing levels. Nevertheless, it’s great to see Google offering this official accessory at a reasonable price.