Apple’s transition away from Intel Macs and towards machines built on the company’s own chips is now official, and we’re expecting Apple silicon to power Macs before the end of the year.

Some developers have already begun to receive their Developer Transition Kits, machines meant to allow them to create apps ready for the new architecture. And, sure enough, they’ve been benchmarked.

The fact that we can see benchmark reports online is odd considering Apple expressily told developers not to run benchmarks at all, let alone have the reports appear online. We doubt Apple will be too happy right about now.

That aside, the new benchmarks show macOS 11 Big Sur running on an Apple A12Z chip inside a Mac mini chassis. That’s the same chip that powers the iPad Pro and we’d expect decent performance. And we get it. Sort of. 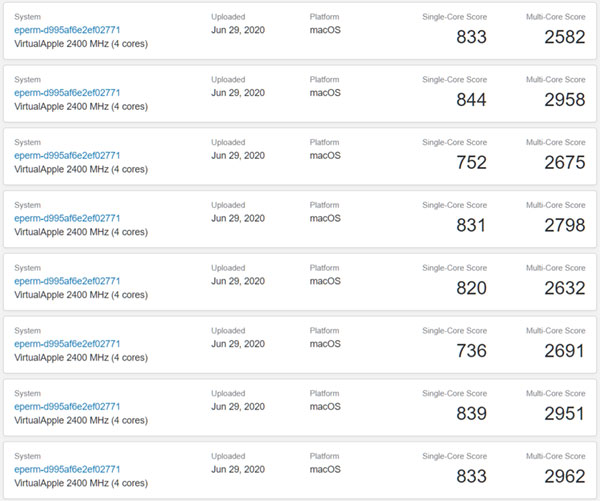 The reason? The benchmarks were run using Geekbench, a utility that isn’t built for the new ARM-based Macs. That means that it will have been running via Rosetta 2, Apple’s emulation system for x86 code. That, surely, means there was a performance hit going on which in turn makes these results somewhat iffy. They’re a guide, sure. But I’d expect “real” Macs running Apple silicon to perform even better. Especially running native apps.

As a case in point, Geekbench reports that the A12Z has four CPU cores whereas it really has eight – four performance and four efficiency cores. Let’s wait until everything’s ready to be tested properly, shall we?