Fake Steve Jobs Biographies Popping Up All Over China [PHOTO]

We’ve seen fake iPhones, iPads and MacBooks. Hell, we’ve even seen some very convincing fake Apple Stores. There were even reports of fake Steve Jobs biographies being sold in China under the name of Steve Jobs’ 11 Advices To Teenagers and now, similar biographies are being sold just about everywhere in China. 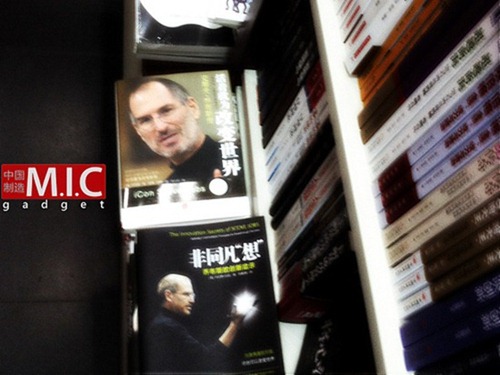 The news comes from M.I.C. Gadget, a blog dedicated to covering some of the greatest gadgets made in China, fake or otherwise. According to the published report, the fake Steve Jobs biographies are available in every major store in mainland China.

One of the biographies is titled Love Steve Jobs. We think it is worth picking up since, it only costs $6 (38 Yuan). It should be enough to tide folks over until the real thing comes around.

Speaking of the real thing, the official Steve Jobs-approved biography, written by Walter Isaacson, is just a couple of months away from being published.

The book talks about nearly all aspect of Steve Jobs’ eventful life from dropping out of Reed College, to impregnating his girlfriend when he was 23 (something he isn’t particularly proud of), from starting up Apple Inc. to being fired from his own company to being hired back, slashing product lines, launching all-new products and, you know, revolutionizing the music, smartphone and tablet industry with the iPod, iPhone and iPad respectively. All information for the biography is sourced from interviews of Steve Jobs and of his close friends and family. Steve Jobs by Walter Isaacson will be available on November 21st, 2011.

Previously, we talked about the fake Steve Jobs’ 11 Advices To Teenagers – a best selling biography released in Taiwan. 4,000 copies of the book were sold as of August 20th and it has made a profit of over $39,000.