Many people associate China with fake products that are easy to come by, but they lack a lot of tech support since they’re not made by credible companies. Yet, it now seems that an official Apple Store in China has serviced a fake MacBook Air, as in: not made by Apple. 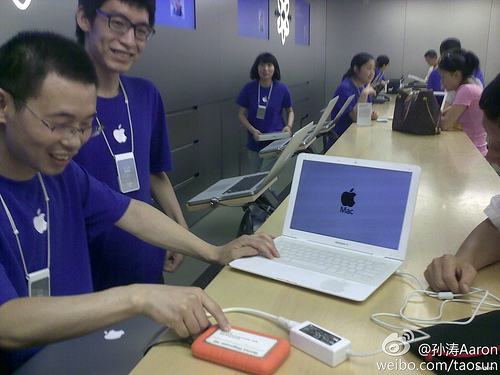 A Chinese customer was able to try this for himself by walking into the Pudong, Shanghai Apple Store and just talking to the tech support people working there, known as "Geniuses", who were happy to service a fake product, at least apparently, as you can tell from the picture above.

Why would tech support employees at an Apple-owned Store even take the time to service fake products instead of just calling the store’s security guards and escort the owner of the fake Air out? There’s clearly quite a bit of room for procrastination inside those stores, even though all figures suggest that they’re packed. Apple is known for being incredibly strict with its employees, so let’s just hope that the employees depicted in the picture won’t be given pink slips for essentially breaking company policy and at the same time, gave the Internet a good laugh.

The Genius Bar, a concept pioneered by Apple when the company’s first store opened back in March of 2001, is a place inside all Apple Stores where customers can ask highly-trained support professionals questions and get help with their products. Apple currently operates 4 large stores in China, although as many as 25 are allegedly planned for the not-so-distant future as the company’s footprint in the country continues to grow exponentially.

This was likely an isolated incident, therefore don’t expect to have your fake MacBook Air serviced at your local Apple Store, especially if you don’t live in China. Yet, at least this time around, fake MacBooks are officially the best-serviced counterfeit goods!