Facebook introduced Skype-powered video calls to their desktop website a few months ago. The feature received positive feedback from users and is expected to be brought over to mobile devices such as Android smartphones, Windows Phones, iPhone, iPod touch and iPad. A report has surfaced today which claims that Facebook video calling for mobile devices is currently in the beta stage of development and will be released soon.

The news come from iPhoneItalia – an Italian blog covering iOS devices – in the form a report in which they cite exclusive sources who claim that Facebook has begun testing a new build of Facebook Messenger app that allows video calling. The report comes over three months after an adminvideocall.png file was found deep inside the Facebook Messenger app.

Screenshots shared by iPhoneItalia show a very simple (I’d even say “digged together”) interface. Video of the person you’re talking to is shown in the center, with your own camera’s view being shown in a small box at the bottom-right while buttons likes Answer, Decline, End Call and Continue show up based on context.

After introducing the video desktop interface, it seems that Facebook wants to bring the same service even on IOS devices. In this regard, the company has just released a new beta for developers the Facebook Messenger Beta where it is active – albeit in a rudimentary way – support for video calls.

We’ve posted screenshots below. Things look way too simple for now, but that is probably because a. it is still being developed (high probability) b. it is fake (low probability). 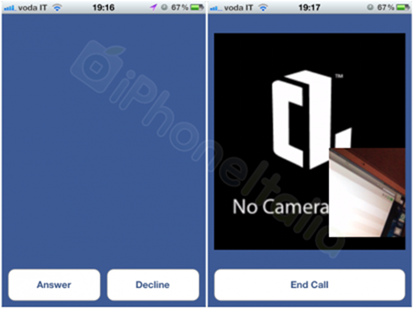 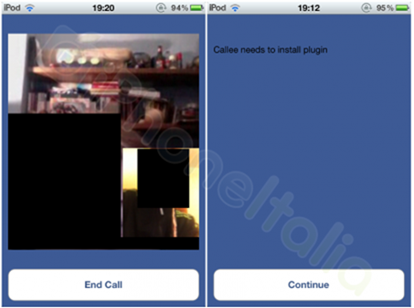 If true, video calling will be introduced to iPhone 4/4S in the form of an update to Facebook’s Messenger app. iPhoneItalia did not mention this coming to the iPod touch 4G or iPad 2 – both of which come equipped with FaceTime cameras – but: firstly, if you look closely at the screenshots, it says “iPod” in the status bar and, secondly, there is no reason Facebook would want to not put their video calling service on the iPod touch 4G and iPad 2.

More news is expected to come out from iPhoneItalia’s source, so stay tuned!