One of the big new features that WhatsApp has been working on lately is voice calling (VoIP), similar to Skype, Viber, and several other major players in the game. Both the iOS and Android apps are currently in a transitional period, at the end of which, they’ll each support free VoIP calls, but with Android version slightly ahead of its iOS counterpart in terms of development progress, Droid users can now enable the new feature in just a couple of easy steps. Below, we’ve got the full details in a how-to tutorial.

VoIP hasn’t been officially rolled out to the masses on WhatsApp for Android, but it is buried within the very latest build, and if you’d like to check it out then the steps are below.

Before you dive in, there are a couple of things to consider. First and foremost, since WhatsApp hasn’t officially offered this out to everyone, it could, and probably will, have its fair share of bugs and imperfections. As VoIP is made available to all WhatsApp users, it’ll surely improve, but at this stage, don’t rely on it.

Also, as we have heard from beta testers, call quality is apparently not the best, so again, it’s not a service that you’ll want to rely on right now. Some early users have reported grainy coverage, but with time, things should get better.

Before you start, you will also require the assistance of another WhatsApp user.

So, with that out if the way, here’s what you need to do:

Step 2: Ask a user who has the feature call you through WhatsApp. You might have to ask friends of friends or associates, but as it spreads, more and more people will be able to get in on the act.

Step 3: After receiving your call, shut WhatsApp down and then re-open it.

Step 4: Check out the new tab for calls. From here, you can call your buddies over VoIP, and the more people you call, the more it will spread. 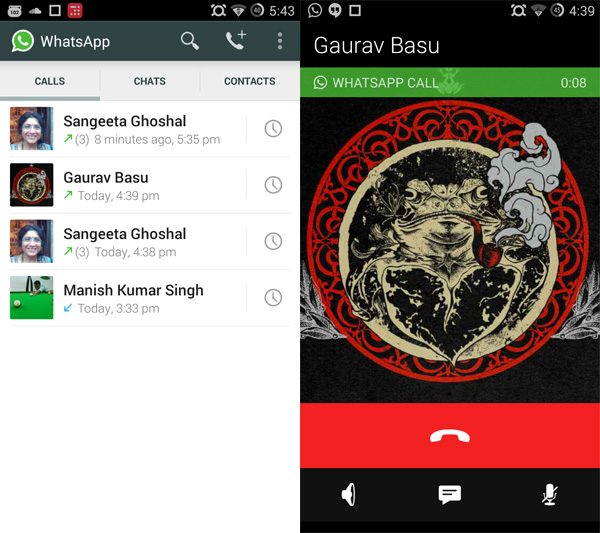