There’s no doubt about the fact that the true power of Android operating system comes from the freedom of being able to use various custom ROMs – firmware that have been cooked directly from the AOSP portal, or that differ from the stock ones in features, or those that incorporate elements from other devices. Not only does that bring diversity to your otherwise-boring smartphone or tablet, but also unleash its full capabilities for your usage. However, not all custom ROMs might sit well with your smartphone, and from time to time, there might be a need to go back to stock software to start afresh.

There’s a difference here which stems from the manufacturer of your phone. For instance, if you’re rocking an Android from Samsung, flashing a stock firmware is fairly easy using Odin. Likewise, HTC has their Rom Update Utility (RUU). Sony, however, isn’t that easy. Until now, there hasn’t been an easy way to revert a Sony Android smartphone back to its original firmware. To counter exactly that, Sony has just released a beta version of their flash tool for Xperia devices, christened Emma.

Essentially, this software will let you flash stock Sony firmware on any supported device that has an unlocked bootloader. In case the latter is missing from yours, you can always check out the company’s official bootloader unlock service.

What does Emma support?

The tool has been released for Xperia range of devices, and to begin with, supports just the following three, although the entertainment giant has promised for more to come down the road:

There’s also the requirement for the device’s bootloader to be unlocked. If you meet both these criteria, you can use Emma to go back to the stock firmware for your phone. However, its notable that this will still void your warranty, although the bootloader will remain unlocked even after using the new tool. 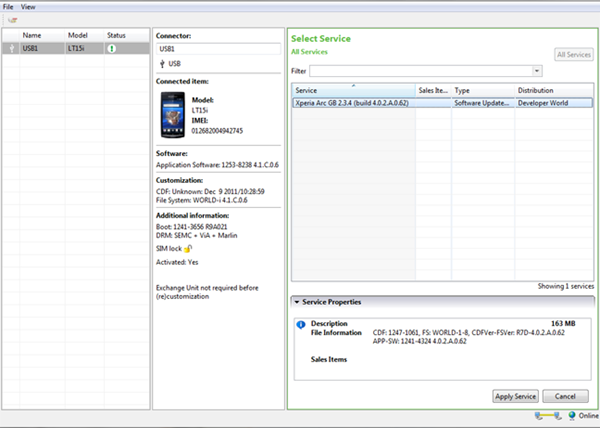 Emma will work with any Windows-based operating environment, and the installation procedure is fairly standard, with just one exception. Once you’ve downloaded the ZIP file from the source link below, extract it to your hard drive, and run Emma.exe. Once installation is completed, copy the Customization.ini file from within the extracted ZIP package to the installation folder, and run the executable to start the program.

Once you have the flash tool up and running, all you need to do is connect your supported Xperia Android phone, after which the software will connect to Sony’s servers, grab the latest stock firmware for your model and proceed with flashing. Naturally, you require an active internet connection for this part.

A new flash tool, and one as comprehensive as this one, is definitely a step in the right direction from Sony. Despite the fact that only three models are supported at present, it shows that the company is serious about making life easy for its customers, and with support for more smartphones coming in the future, we can only hope that developer interest in Xperia line of devices is going to pick up going forth.