When Apple’s iOS 6 initially launched back in September, the backlash against the Apple Maps offering was fierce, and Samsung made sure Apple lived to rue its shortcomings by running an ad mocking the Cupertino’s paltry replacement of Google Maps. But with Australian police having gone one step further in labeling Apple Maps as a potential no go, Sammy is once again dancing on the proverbial grave, as CNET Australia reports.

Leaving millions of consumers annoyed is one thing, but when the police are making such statements as to consider Maps a danger to life, things get a little more serious. Apple has responded in the expected fashion – by hurriedly releasing updates galore to try and amend the highlighted issues, but as it continues to fight a difficult battle against its own shortfalls, Samsung has taken the chance to, once again, plug its own products.

The two companies are constantly at loggerheads in the courtroom over numerous patent disputes, and as the business connections between the two continue to disintegrate, the slanderous advertisements have become a common occurrence. In this latest one, Samsung shows an ad board next to a mud-clad SUV, surrounded by a tent, portable chair, and other camping equipment. The quip on the board next to it reads:

Oops, should have got a Samsung Galaxy S III.

Get navigation you can trust.

It’s the kind of opportunistic approach we’ve come to expect in the battlefield that is the mobile industry, but with Australians getting lost in dangerous terrain thanks to the misinformation provided by iOS 6 Maps, it’s no real laughing matter. The cops certainly don’t think so, and with no real positive publicity of note so far with regards to Maps, one of iOS 6’s flagship features has lost consumers in more ways than one. 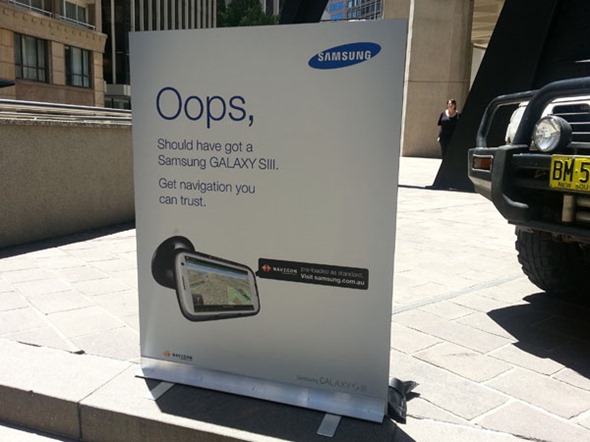 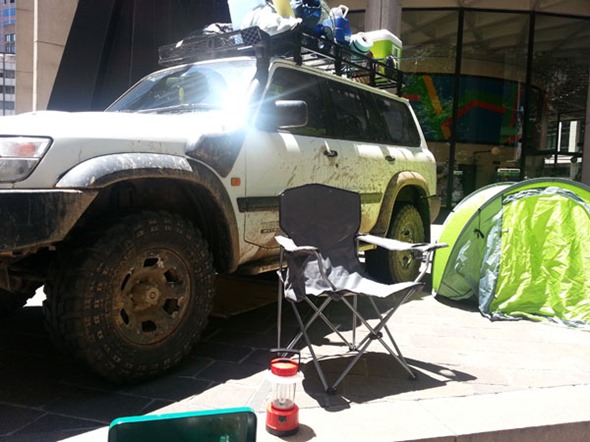 Google is said to be preparing an App Store incarnation of its old Maps offering, but as yet, said app has failed to bear fruit. iOS 6 is, on the whole, a decent improvement from iOS 5, but until this Maps situation is dealt with by Apple, the negative press will continue to rain down, and rivals such as Samsung will continue to feed off of it.