If you pulled together all iPhone, iPad and iPod touch users running iOS 6  and polled their collective opinions on the new Maps app that replaced Google’s offering, then it is likely that the negative comments would far outweigh the positive ones. If you asked the same users to give some constructive feedback on the Maps app, then it’s unlikely that extremely harsh comments would show up in that poll, but that is exactly how the the Victoria Police Department in Australia have described the software to residents of the local area.

The outspoken verdict on the new Apple Maps app comes after a number of motorists in the Mildura locality of the region being led astray after putting their navigational trust in the new turn-by-turn directional features which Apple have bundled into the vector based Maps app. Rather than guiding them to their final destination with minimal fuss, it seems that the app has been leading the motorists off the beaten track, resulting in a number being stranded within the Murray-Sunset National Park.

It doesn’t exactly sound like the worst thing in the world to me, stuck within an Australian national park, but considering temperatures regularly exceed 46 degrees Celsius, there is no running water supply and the park is actually 70 kilometers away from the actual desired location, it becomes a bit of an issue. The police department in question have noted that they have contacted Apple directly in an attempt to gain some clarification on the future of the mapping system, requesting that particular attention be paid to the local area in the hope of dramatically improving the quality of the maps and directions given to motorists in that area. 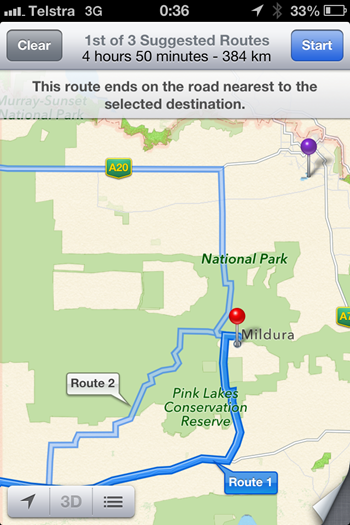 We knew that iOS 6 Maps had a number of issues when Apple were throwing all possible resources at to rectify, but we’ve never heard it described in such manner before. The same police force is recommending all motorists and travellers intending to travel to that area to rely on alternative mapping solutions, rather than placing their full trust in their iPhone or iPod touch for navigation. Considering the weather conditions and lack of water in the Murray-Sunset National Park, it seems like a good suggestion.