When you’re running a service for over a billion active users, the emphasis on privacy and security are perhaps even greater, and Facebook has always been diligent in its quest to maintain the privacy of its extensive user base. Today, the world’s foremost social network announced a bunch of new privacy features, as well as other general alterations in a press statement entitled "Better Controls for Managing Your Content". Here, we summarize what these changes mean for you.

First and foremost, Facebook is implementing a feature called Privacy Shortcuts which, in short, make it easier for you to obscure the content you don’t wish to see. At present, if you want to alter, say, your privacy and timeline controls, you have the inconvenient step of navigating onto a completely different page, which disrupts what you were initially doing. Things have now been simplified, and you can alter settings such as “Who can see my stuff?” or “Who can contact me?” or “How do I stop someone from bothering me?” right from the toolbar.

App permissions have also been revamped. Hitherto, apps have asked permission to access your info / post to Facebook in one fell swoop, but soon, the two requests will begin to be separate, enabling you to be picky over which segments of your content you wish to share with third-party apps. Not all apps will change to this new format, but most will, and a segregation of different permissions is certainly a step in the right direction.

Facebook has also upped its push to ensure users understand what implications each privacy setting has. In-context notices will now be an even more prominent feature, so users will be under no illusions as to which content is shown where. For example, content hidden from the timeline might still show in the news feed or search, and while some already will be aware of this, the prompting messages will keep everybody informed.

As well as one or two minor changes to the Activity log, there are also a couple of new tools to help you manage your content. The Request and Removal tool will help you deal with multiple photos you’re tagged in on Facebook. If you would like them removed from Facebook, the tool will help you request as much to the original uploader. Said features are available under the "Photos of You" tab, alongside another which lets you untag multiple photos in one hit. 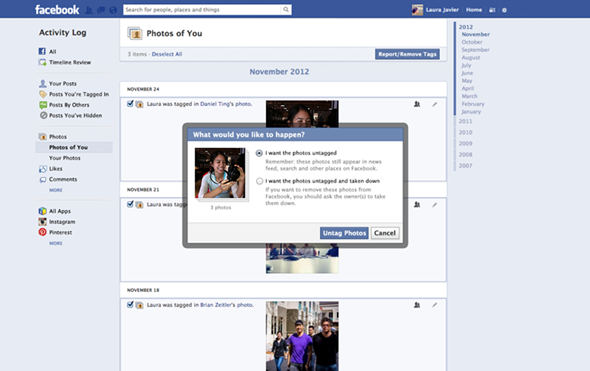 These changes will begin to roll out from the end of the month.