Apple has made available for download iOS 11 public beta 4 OTA update aimed at those device owners who have registered themselves in Apple Beta Software Program. Public testers can finally download, install, and interact with the version of iOS 11 which was seeded to developers just 24-hours ago under the guise of developer beta 5.

The immediate release of iOS 11 public beta 4 also means that Apple has immediately expanded the testing pool involved in putting the latest version of iOS 11 through its paces. 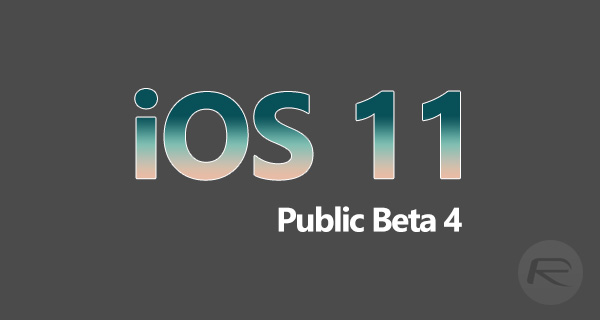 As mentioned earlier, the Cupertino-based company recently released developer beta 5 to those with an active Apple Developer membership. The just released public beta 4 seed is essentially the exact same build and is just served to public testers via a different internal development branch, meaning it introduces the exact same changes, improvements, and refinements which developers have been testing for the last 24 hours or so.

As for what’s new in this build, while Apple has made small UI tweaks here and there, don’t expect drastic feature changes this late in the game as iOS 11 is likely only a month away from public release now.

Generally speaking, new features integrated into iOS 11 have already proven to be a solid hit with those testing the platform, and the introduction of ARKit, which will work hand-in-hand with the new hardware capabilities of iPhone 8, will almost guarantee success for that new release.

If you have been hearing about iOS 11 from friends, family, or just from reading social or news posts on the topic, and like what you are hearing and want to get involved in the beta testing process yourself, then you are probably going to want to know how to go about doing that. Thankfully, we already have the guide covered in detailed previously which applies to this latest seed as well. If you are already running iOS 11 public beta 3, getting onto public beta 4 is as easy as heading over to Settings > General > Software Update and grabbing the OTA update from there. If this is the first time you are looking to install iOS 11 public beta, you can check out our full guide on how to install it right here: Download iOS 11 Public Beta 4 And Install The Right Way, Here’s How.