A newly discovered feature in iOS 11 shows that Trust This Computer prompt will now require user authentication, meaning Apple is going to start forcing users to explicitly authenticate on the device when they plug an iPhone or iPad into a computer.

With iOS 10, when a device is connected via USB to an unknown computer, iOS throws up an alert asking if the user wants to “Trust This Computer?“.

When “Trust This Computer” was introduced for the first time, at that point in time there were very few security mechanisms in place to prevent alien computers from accessing information on a device if that iPhone / iPad had been plugged in via USB. “Trust” and “Don’t Trust” alert has since been added which has provided another barrier to the machine accessing the device without user interaction.

Now, with these latest improvements, an iPhone / iPad user is actually asked to authenticate before the computer is allowed to access that device. If that device has Touch ID enabled on it as a security measure, then the user is asked to provide a valid fingerprint in order to get past that stage and to tell the system that the computer is trusted.

If Touch ID isn’t active, but a Passcode has been created and put in place on the device, then it stands to reason that the iPhone will require the user to enter the correct passcode to proceed. 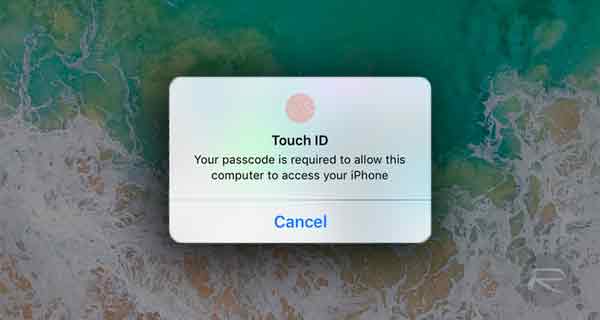 Some users may see this as a slight usability issue which prevents them from taking the action that they wanted to take. Especially when you consider that iPhone 8 is rumored to come with facial detection rather than Touch ID. It remains to be seen how that will actually work in the real-world, but it’s difficult to argue or contest a new feature when it has been put in place in order to beef up security on the device itself.

This might not seem ideal initially, but the new authentication requirements are only making our iOS devices more secure.