This video compares iOS 10.3.3 standard battery life Vs Low Power Mode Vs Background App Refresh on an iPhone to see the difference between all three. Here are the details.

There are few things in this world that we would classify as nothing short of voodoo more than making a smartphone’s battery last as long as possible during a day. There are plenty of schools of thought for how to achieve that, and while most of them involve essentially disabling all of the cool stuff that makes our smartphones smart, others are simply snake oil. 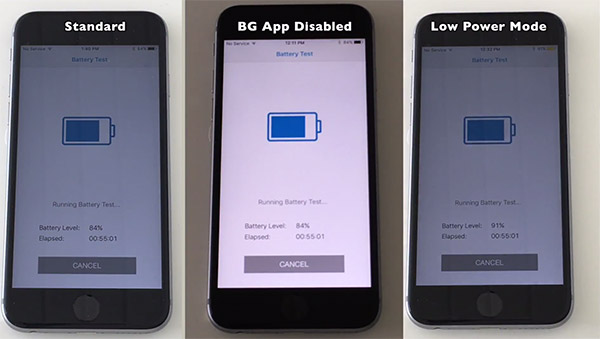 Apple has done a fairly good job of stretching modern iPhones’ batteries out of late, adding new features to iOS that help to eek every last minute of battery life out of those cells. One of those features is Low Power Mode, but just how effective is it? In order to answer that question, YouTube channel iAppleBytes set about running three tests using an iPhone 6s on iOS 10.3.3.

Those tests involved taking said iPhone and running the Geekbench battery test to see how it fared. One test was a standard configuration with everything turned on and running away without a care in the world. The second test simply disabled Background App Refresh to see how that impacted battery life, while the third enabled Low Power Mode. Before each test was run, all apps were force closed to ensure a fair test.

We do not want to spoil the results too much, and we think it is probably fairly obvious to everyone that the test with Low Power Mode enabled lasted longest. What we find interesting is by how much, so be sure to check the video out for yourselves to find out.

It is also worth noting that the test in which Background App Refresh was disabled scored almost identically to the standard test, presumably because all apps were force-closed beforehand. We’d be interested to see the same test run with the usual array of apps running, instead.