Apple has just seeded macOS 10.13 High Sierra public beta 4 and tvOS 11 public beta 4 to testers. This immediate release means that those enrolled in the Apple Software Beta Program are now able to download, install, and interact with the same version of macOS High Sierra and tvOS 11 which was rolled out as beta 5 to developers only recently.

Here’s everything you need to know about today’s seeds: 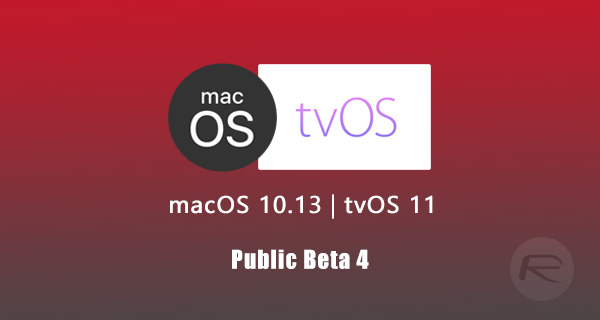 About macOS 10.13 High Sierra: macOS 10.13 High Sierra is a platform which Apple can sit and be extremely proud about. This isn’t just a symbolic move across from 10.12 to 10.13, but rather a significant update containing some big and impressive improvements which will definitely be of advantage to all compatible Mac owners. As part of the move to 10.13, Apple has made huge improvements to key areas, such as Safari, the native Mail app, the underlying file system that macOS is built on top of, and even introduced machine learning and advanced editing tools into the Photos app.

Those who regularly use Safari will find a browser with new features like having the ability to prevent videos on a page from auto-playing, among other things. Apple’s Mail app is now a lot more stable and efficient in how it works, and the platform is now built on top of Apple File System (APFS) instead of the legacy HFS+. Of course, there are tons more to interact with for anyone installing it.

So just how do you go about getting macOS High Sierra onto your Mac if you aren’t a developer? Well if you are new to installing macOS public betas, you can follow our guide here Download macOS 10.13 High Sierra Public Beta And Install The Right Way, Here’s How on how to get started with Apple Beta Software Program. Already have previous beta seed of macOS High Sierra installed? Simply launch Mac App Store and grab the latest public beta 4 seed from there.

About tvOS 11: Apple, for one reason or another, didn’t introduce tvOS 11 directly during WWDC but rather sneaked it out into the ether. With that said, it’s still a decent upgrade that definitely brings additional power and functionality to fourth-generation Apple TV sets, including the introduction of a new automatic light and dark mode which switches the visuals depending on the time of day it’s being used.

There are also changes to the underlying architecture that dictates how apps are built, as well as new notification and background access which should hopefully mean that we start to see richer more dynamic apps landing on the tvOS App Store in the coming months.

In addition to public beta 4 of macOS High Sierra and tvOS 11, Apple has today also seeded iOS 11 public beta 4 to testers. You can find more details on that release in our separate post here: Download iOS 11 Public Beta 4 OTA Update For Your Device.