Apple has today made available for download beta 5 of macOS 10.13 High Sierra, beta 5 of watchOS 4, and beta 5 of tvOS 11 platforms.

All three pre-release seeds are being offered to those registered with the Apple Developer Program account and can be downloaded with immediate availability through the individual hardware settings on a compatible Mac, Apple Watch, and fourth-generation Apple TV. 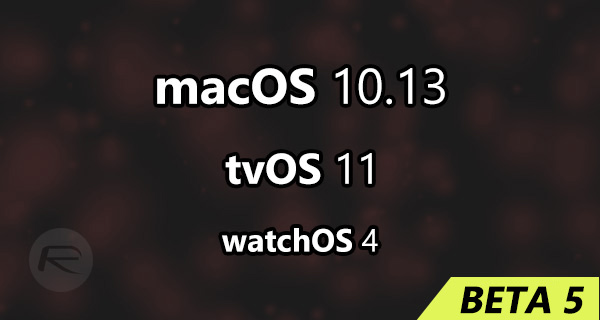 macOS 10.13 High Sierra: The fifth developer seed of macOS 10.13 High Sierra is another opportunity for keen developers to get to grips with not only the wholesale changes introduced into this latest version of macOS but also the recent improvements which have been added since the last release. Developers will be hoping that this release is smoother and more refined than the last, but it’s really the mass High Sierra improvements which are the biggest discussion point.

Compatible Mac owners can expect a desktop macOS platform with huge Safari improvements including the ability to block the automatic playback of videos embedded within websites. Apple is also moving macOS across to the new Apple File System structure which is a big internal change. The stock Photos app now has advanced editing tools as well as the benefit of machine learning to make it a lot more intuitive and easy-to-use. If that’s not enough, there’s iCloud File Sharing and collaboration, Live Photos in FaceTime, and new natural voice features for Siri.

macOS 10.13 beta 5 can be grabbed from either Mac App Store or developer.apple.com.

watchOS 4: The Apple Watches underlying firmware is one that a lot of people have been keeping their eyes on. Apple is about to take watchOS into its fourth iteration, meaning that developers now have immediate access to the fifth pre-release seed of watchOS 4 with an immediate download through the Watch app.

From a feature perspective, Apple has clearly focused on defining what it feels are the core wants and needs of existing and potentially new Apple Watch owners. This includes a redesigned workout and fitness experience, the inclusion of a new phone dialer which lets numbers be easily dialed, and even new animated watch faces which are fun for all users.

You can download watchOS from Watch companion app on a connected iPhone or from developer.apple.com

tvOS 11: For one reason or another, Apple didn’t take the opportunity to showcase tvOS 11 during this year’s WWDC, but as we’ve since found out, that doesn’t mean it isn’t in the works. It’s very much here, as proved by this fifth developer seed.

From a feature perspective, Apple isn’t changing the game with tvOS 11, but rather progressing the platform along nicely to appease those with a fourth-generation Apple TV unit. This includes features such as an automatic night and day mode which changes the UI based on the time of day the TV is being used, as well as new backgrounding and notification abilities which should introduce a whole new breed of rich apps.

tvOS 11 can be downloaded from either settings section of tvOS or from developer.apple.com.

Public Beta 4 of macOS High Sierra and tvOS 11 haven’t been rolled out yet but they are expected to arrive in another day or two.