Jailbreaking is a complicated business, and although it is perhaps still less complicated than it was back in the days of the early iPhones, Apple’s constant battle with those creating jailbreaking tools will always prevent the process from being user friendly.

For example, older devices that were upgraded to run iOS 9.3.5 were left out in the cold, because Apple managed to prevent jailbreaking in that particular release and there was no way to downgrade to a jailbreakable version of iOS. 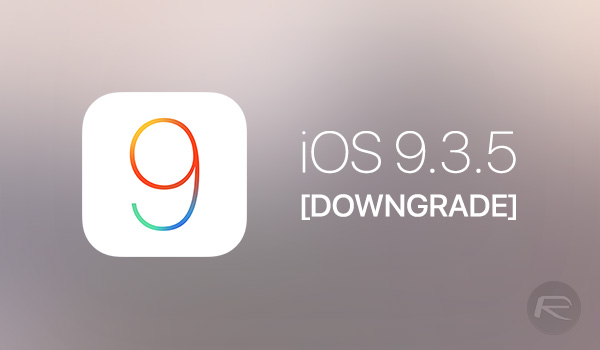 Upgrading on an older iPhone simply is not an option. There is good news on the horizon though, because there may well be a way to downgrade from iOS 9.3.5 after all.

Hackers @alitek123 and @Thmitt look to have come to the rescue of owners of 32-bit iPhones running iOS 9.3.5 who want to be able to jailbreak, with the pair seemingly having discovered a way to downgrade from the firmware. The process should, in theory, allow owners of older iPhones to downgrade to iOS 9.3.3 and then jailbreak via either the Pangu jailbreak or the Home Depot method, both of which we have covered in walkthrough form before.

The developers have confirmed, however, that their “re-restore” tool will unfortunately only be available for macOS, so Windows users are most likely to be left without a solution – at least an official one.

As is always the case, though, the whole process is going to need some working out before we are 100% comfortable with it.

If you are using a 32-bit iPhone and have not been able to jailbreak it thanks to Apple’s iOS 9.3.5 release, then there might now be a chance for you to downgrade and jailbreak, provided you meet certain requirements.

One of the two developers working on the tool came ahead to explain said requirements and offer a tentative ETA.

Q: Does this need blobs?
A: Yes, blobs are required.
Q: What if I don’t have blobs?
A: You’re out of luck then. Sorry.
Q: What devices does this method work on?
A: Any 32 bit device running any iOS 9.x version.
Q: Do I have to be on iOS 9.3.5 to trigger this bug?
A: No. The bug exists on any iOS 9.x version.
Q: What if my iOS device is on iOS 10.x?
A: You’re also out of luck then. Sorry.
Q: Any ETA?
A: I don’t necessarily like giving ETA’s out, but I feel kind of confident about this one. Expect something either at the end of this month or sometime in April.