Here’s a guide on how you can downgrade iOS 10.2.1 to 10.2 firmware on your compatible iPhone, iPad, or iPod touch device, and the reason why you may want to consider it.

With iOS 10.2.1 being rolled out officially for public consumption, the likelihood is that there will be a number of eager iPhone, iPad, and iPod touch owners upgrading to the latest firmware without taking a second to think about any possible repercussions. If you have taken that immediate opportunity to grab the latest update on your device, but are instantly regretting that decision for one reason or another, then this post is most definitely for your eyes. 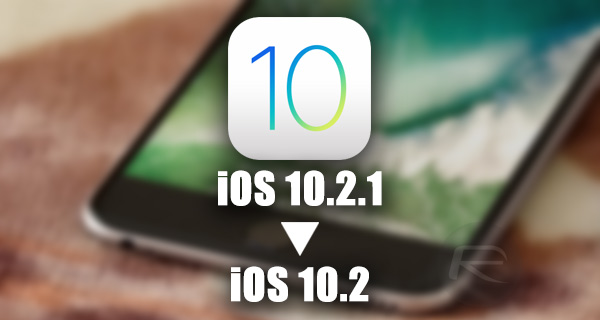 As you will likely know by now, it is possible to immediately roll back the firmware on your device from iOS 10.2.1 to the last firmware version which Apple happens to currently still be signing.

At the time of writing, that firmware version is iOS 10.2. However, what you really need to take into consideration is why are you actually wanting to downgrade in the first place, and perhaps more importantly, what benefits will downgrading to iOS 10.2 actually bring? It’s currently not possible to go below iOS 10.2, and even the iOS 10.2 signing window could close at any time leaving you firmly on iOS 10.2.1.

It’s worth noting that downgrading from iOS 10.2.1 to iOS 10.2 won’t immediately bring any jailbreak-related benefits, though it’s important to note that iOS 10.2 is still vulnerable to KPP technique used by Luca Todesco in iOS 10.1.1 jailbreak. Luca has already confirmed that he will release support for iOS 10.2 jailbreak in Yalu update soon.

As you may already know by now, the latest version of iOS which can be successfully jailbroken is iOS 10.1.1 using Luca Todesco’s Yalu + Mach_Portal tool. That means that if you do go through the process of downgrading to iOS 10.2, it wouldn’t put you on a firmware version that is currently able to be liberated from Apple’s walled garden, but as mentioned earlier, it soon should.

Beside the soon-to-be-released jailbreak benefit, you may also want to downgrade to 10.2 in case 10.2.1 gives you performance issues or notable battery drain.

So, if you’ve taken all of the above into account, and find yourself in a position where you think you have made a mistake by upgrading to iOS 10.2.1, and now want to take your iPhone, iPad or iPod touch back down to iOS 10.2, then you can follow our previous guide on the subject here as the process explained in the guide is same for going from iOS 10.2.1 to 10.2. Just use iOS 10.2 IPSW firmware file from here where relevant.

Remember to act quickly and go through this process as soon as humanly possible as Apple could stop signing iOS 10.2 at any time, without warning.

Update x1: As predicted, iOS 10.2 jailbreak yalu102 has now been released, and Apple is still signing iOS 10.2 firmware, meaning you can still downgrade from iOS 10.2.1 to iOS 10.2 and jailbreak at this point in time. Apple will close signing window soon though, so better hurry up before it’s too late.

Update x2: Apple has now stopped signing iOS 10.2 firmware. You can learn about this development in our separate post on this topic here.