For those don’t know, Cydia 1.1.28 is the first version of Cydia which brings native support for 64-bit devices, as well as full support for iOS 10-10.2 yalu102 jailbreak.

Additionally, Cydia now uses APT 1.14~b, which is basically a “major update to the core package management logic used by Cydia. This library, which is shared with Linux distributions such as Debian and Ubuntu, is an industry standard, which Cydia has been excited to share. For purposes of performance and reliability, Cydia had a number of patches to the (rather old) copy of APT it had been using. It turns out APT’s upstream has been paying attention, and was excited to have us update.”

The usual bug fixes and other under-the-hood improvements are of course also part of this latest Cydia release, and best of all, it even supports jailbroken devices running older iOS versions such as iOS 9, iOS 8 and even iOS 7 and below.

Full changelog of Cydia Installer version 1.1.28 can be seen in the screenshot below:

Apart from all this, Saurik has also enabled tweak purchases on Cydia for the latest iOS 10-10.2 jailbreak, meaning those jailbroken on latest firmware version can now officially purchase paid packages from the Cydia store.

To update Cydia to version 1.1.28 on your jailbroken iPhone or iPad, simply launch Cydia and tap on Changes tab from the bottom bar. Next, tap on Refresh on top left and wait for new packages to reload. Once reloaded, Cydia will offer you an Essential Upgrade prompt, tap on Complete Upgrade to get onto the latest version. 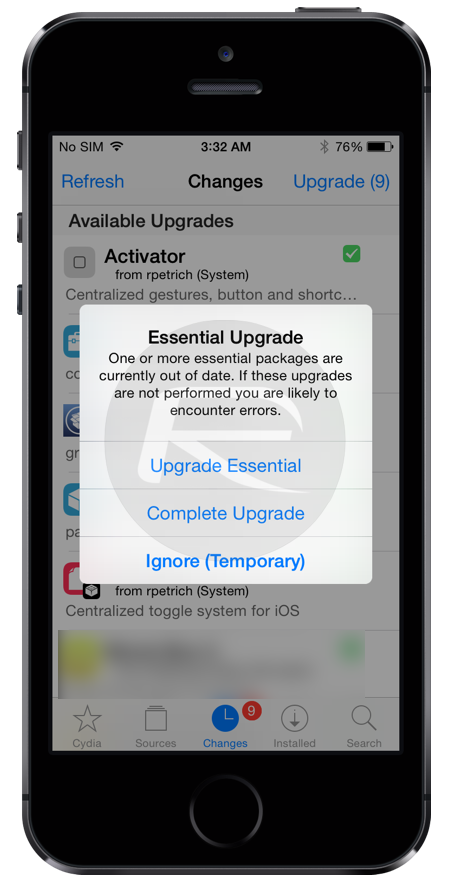 Have questions? Drop your queries in the comments section below!