Apple’s iPhone XR Was The Biggest Selling Smartphone Of 2019

Apple’s XR might be more than a year old, but it’s still selling strongly. In fact, according to new report by Omdia, it was the best selling smartphone of 2019.

Omdia is the result of a merger between Informa Tech and the acquired IHS Markit technology research portfolio, for those who don’t spend their days knee-deep in this stuff.

The report claims that Apple shipped 46.3 million iPhone XR units which is a huge increase on the 23.1 million that it sold the year before. But that makes sense considering the phone was launched in September of that year.

Similarly, the iPhone 11 sat at 37.3 million units in the two-or-so months that it was available in 2019. Apple found itself with the top two best-selling phones on the planet, with Samsungs Galaxy A10, Galaxy A50, and Galaxy A20 rounding out the top five spots.

As a whole it’s thought that Apple’s iPhone shipments were down almost 5%, but that isn’t a concern for Omdia.

Apple has consistently owned the first and second positions in the global smartphone model shipment ranking, with the company maintaining this dominant position for more than five years running,” said Jusy Hong, smartphone research and analysis director at Omdia.

The company’s continued dominance on this front is all the more remarkable when considering that Apple’s price hikes caused overall iPhone shipments to decline last year. 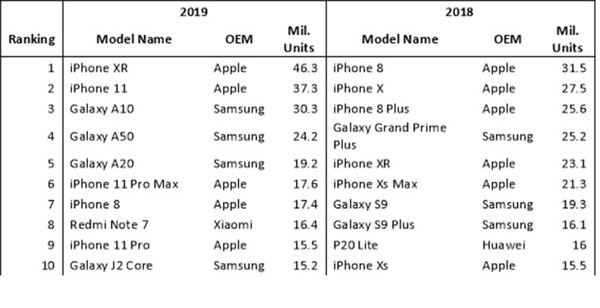 The full report makes for some interesting reading and it will add more color to the findings. It’s particularly interesting to see the Redmi Note 7 sitting in 8th place, well above some big name players from more well-known names.