Apple’s iPhone 11 Outsold Every Other Smartphone In Q1 2020 With 19.5 Million Units Shipped [Report]

Apple’s iPhone 11 was the best selling phone during the first quarter of 2020 according to new research data provided by Omdia.

Apple reportedly shipped 19.5 million iPhone 11 units during the first quarter with buyers enjoying the relatively now starting price and the strong features offered including Face ID and some gorgeous colors.

“For more than five years–even amid shifting conditions in the wireless market and the global economy–one thing has remained consistent in the smartphone business: Apple has taken either the first or second rank in Omdia’s global model shipment ranking,” said Jusy Hong, director of smartphone research at Omdia. “Apple’s success is the result of its strategy to offer relatively few models. This has allowed the company to focus its efforts on a small number of products that appeal to a broad selection of consumers and sell in extremely high volumes.”

The iPhone XR found itself in fifth spot behind offerings from Redmi and Samsung. The budget iPhone also managed to outsell the iPhone 11 Pro and iPhone 11 Pro Max, although it’s notable that the two Pro models were counted individually rather than as a single entity.

Apple’s iPhone XR was the most popular phone of all this time last year, showing that Apple’s move to offering value as well as features is a winner. 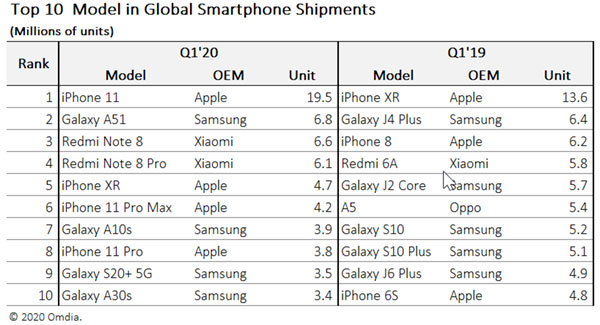 People might not be buying the best iPhone available, but the second best is still more than good enough for most.