Apple’s iPad Pro refresh isn’t in the hands of users yet, but someone, somewhere, is apparently running Geekbench on one. Early numbers have started to show up in the popular benchmarking app, and the scores are pretty impressive. And by that, we mean they’re mind-blowingly good.

According to the scores posted to Geekbench, the iPad Pro powered by Apple’s A12X Bionic chip scores 5030 in single-core tests, a result that is barely behind the 5053 that the current latest 15-inch MacBook Pro with an Intel Core i7 CPU can manage. When it comes to multi-core speed numbers, the iPad Pro boasts a score of 18106 which is again just south of the MacBook Pro’s 21351.

Those numbers are pretty staggering considering one is a $2799 pro notebook at the high-end of Apple’s lineup and the other is an iOS tablet that can be had for as little as $799.

Of course, they are different things to take into consideration above simple Geekbench scores, but the fact that an iPad can compete with a 15-inch MacBook Pro is impressive indeed, and another sign of just how powerful Apple’s A12X Bionic chips appears to be. 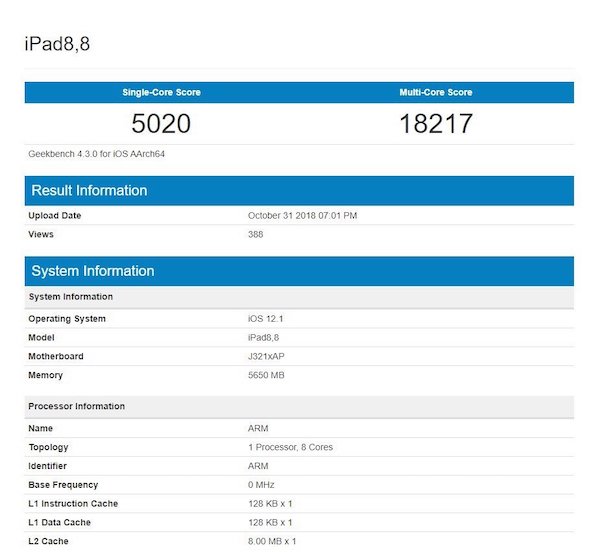 With internet scuttlebutt suggesting that these A-series chips will eventually morph into something that will take over processor duties in Macs, these scores are even more significant.

We have yet to see any reviews or real hands-on reports of the new iPad Pro beyond the time people got to spend with it following the announcement event this past Tuesday, but we would expect them to start appearing in the next few days. The 2018 iPad Pro goes on sale next Wednesday, November 7th.