In news that should surely come as absolutely no surprise to anyone, Apple says that a proposed $200 billion US tariff on Chinese goods would impact a whole host of its devices and has sent a letter stating as much to the United States government.

According to Apple, such a tariff would impact the Apple Watch, AirPods, HomePod, Beats headphones, AirPort routers, Apple Pencil, Magic Mouse and Magic Keyboard, MacBooks, Mac mini, and a selection of cables, chargers, and adapters.

In the letter to the government, Apple urged it to avoid the tariffs as it will impact Apple with the company saying that the U.S. will be the hardest hit by the tariffs, in turn impacting growth and causing higher prices for Apple’s customers.

On the subject of making Apple’s products more expensive, the company said that the tariffs would increase the cost of U.S. operations and as a result disadvantage Apple when compared to its foreign competitors.

Second, because all tariffs ultimately show up as a tax on U.S. consumers, they will increase the cost of Apple products that our customers have come to rely on in their daily lives. For example, the proposed tariffs cover Apple Watch, which has become the top-selling smart-watch in the U.S. and globally.

Since we introduced Apple Watch a few years ago, we have heard from users about how it has changed, and in some cases saved, their lives. Apple Watch is also being used in conjunction with American universities to help individuals to manage health conditions such as epilepsy and post-heart attack recovery.

There are already three tariffs in place, impacting steel, aluminum, and $50 billion worth of other goods that are imported from China. This fourth tariff will be the first to directly impact Apple if it goes ahead. 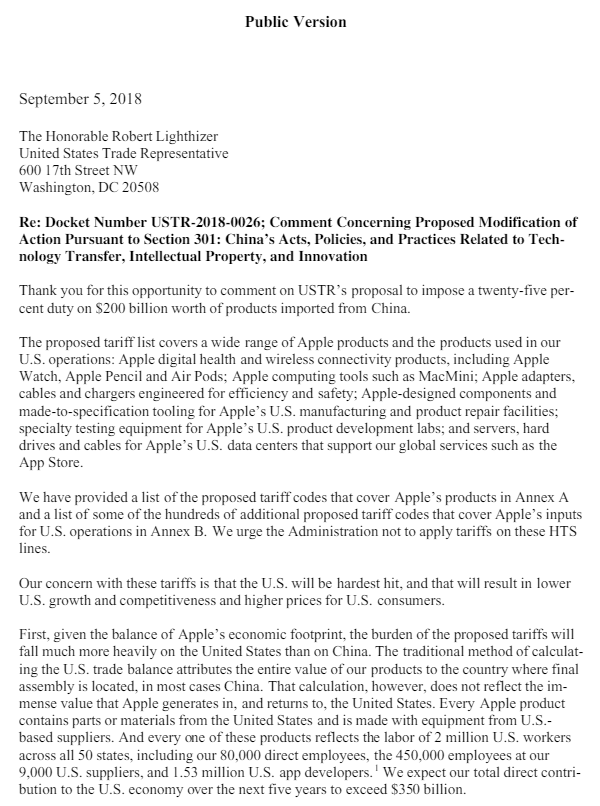