Dubbed HomePod 11.3.0, the firmware is the unimaginatively-named underlying operating system which powers the HomePod and is now available as version 11.3 for owners to download.

It has previously been revealed that the underlying HomePod software is basically an adapted version of iOS, the firmware which powers Apple’s iPhone and iPad devices.

The exact internal features of HomePod 11.3.o are currently unknown, but it’s highly likely that it will include features and functionality which are not currently made known yet or exposed by Apple. Unfortunately for us, and for HomePod owners, Apple has once again released a version of its firmware with the “general improvements for stability and quality” release notes, which, as we all know, doesn’t exactly give us a lot to go on or chew over.

However, it could very be that this release is simply a stability and compatibility update to coincide with the release of iOS 11.3 final version for iPhone and iPad devices, as well as watchOS 4.3 and tvOS 11.3 final versions for Apple Watch and Apple TV devices respectively. 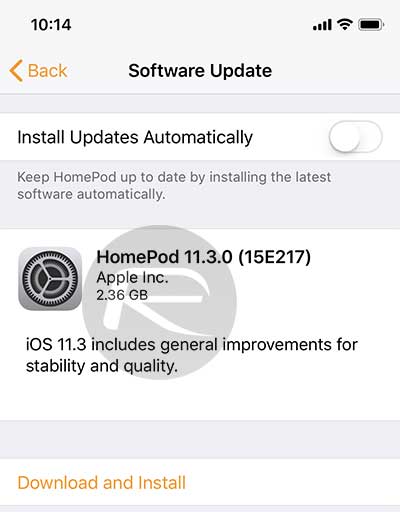 For those who have HomePod, the new HomePod 11.3.0 firmware is available to update via the native Home app on the connected iPhone or iPad. In order to do that, the connected device will need to be running iOS 11.3 to ensure that it’s capable of accessing and installing HomePod 11.3.0 to the Siri-powered speaker.

As far as HomePod is concerned, this release is likely going to be the first of many as Apple looks to develop the power and capability of its new speaker. And, of course, if you haven’t purchased a HomePod yet, what are you waiting for? This release proves that Apple is committed to the device and will continue to bring new features and capabilities to it just like it does with other platforms.