The all-new iPod touch 6 is definitely a remarkable device, given the significant upgrade Apple has packed into its iOS-based portable media player. The refreshed iPod touch was launched just a short while back, and luckily, some benchmark results have already dropped in detailing just how much of a punch it actually packs.

Following the hype surrounding the launch of the new iPod touch, some have managed to get hold of the device to benchmark it. Substantiating on the rumors and speculations, Apple has launched the new iPod touch with a 64-bit A8 CPU found in the iPhone 6 / 6 Plus, along with the M8 motion co-processor. 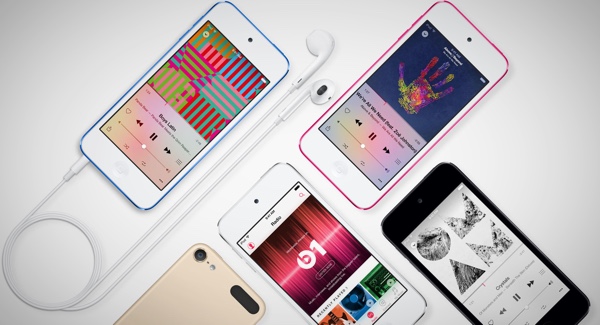 Benchmarks show that the CPU in iPod touch 6 is a tad bit under-clocked at 1.10GHz per core compared to the iPhone 6’s A8 chip clocked at 1.39GHz per core. Given the smaller battery and the more powerful CPU, the cut in clock speed is hardly surprising. Geekbench 3 gave scores of 1,379 on the single-core test, and 2,440 on the multi-core test which is a huge stride from the A5 CPU wielding iPod touch 5.

Even though it’s slightly slower than iPhone 6, the iPod touch 6 is still six times faster than the previous-gen iPod touch 5. It also features 1GB of RAM akin to the iPhone 6 / 6 Plus compared to 512MB found in last generation model. The device supports Apple’s Metal technology for a much-improved gaming experience as it comes pre-loaded with Apple’s latest mobile operating system, iOS 8.4.

Interestingly, this potent little gaming / media player packs the latest Bluetooth 4.1 specification, offering much improved performance and reliability, including better power management and reduced interference with LTE bands around it. Now why is this interesting you ask? Well, none of the other devices from Apple have Bluetooth 4.1, and that includes your latest Mac, iPhone, and iPad. There’s a possibility though that the upcoming iPhone 6s / 6s Plus could support this specification upon launch. 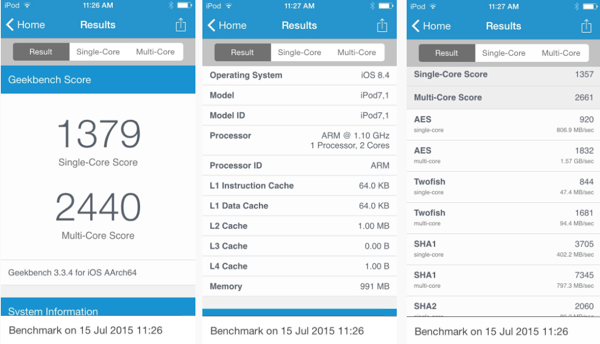 The new iPod touch is no supercharged performer, but given the almost iPhone 6-like gaming abilities with the $199 entry-level price, Apple has given a new life to its once popular portable music player.