Add A Random Flip Animation To Your SpringBoard Icons With RandomFlip For iPhone, iPad

For those of you who have been hanging around the jailbreaking scene for quite some time, you will no doubt be familiar with a number of the more prominent developers in the community who regularly release high quality work which is designed and implemented to a very high standard. If you are anything like me, you will probably have your favorite developer(s) who you will always support and purchase or download their releases but whatever you do, don’t ask me to tell you who mine is.

If you do have a favorite developer, chances are that they would have been part of the Tweak Week Daily Challenge which was organized by Ryan Petrich in 2011 and consisted of developers signing themselves up to produce a tweak each day for seven days. The rules were simple – all developers involved must release one tweak per day which has to be open-sourced and work was only allowed to be started on the tweak on the day it was released. Considering a lot of tweaks on Cydia were becoming commercial downloads, the tweak week idea was a very novel one which guaranteed jailbroken device owners with a set of free tweaks to choose from. The challenge was actually accepted by nine developers and resulted in a plethora of free of charge enhancements and modifications to choose from, some of which were useless as you would expect but some were actually very handy to have and dare I say it, fun!

Greek developer Elias Limneos was one of the people who took part in the tweak week challenge, stepping up to the limelight on week five. His third release during his challenge was called ‘RandomFlip’ and brought about a change to iOS which was nothing more than a bit of light hearted fun. RandomFlip contained no additional settings, icons or toggles but simply altered the behavior of the application icons to make them randomly flip and turn over at random intervals of time. 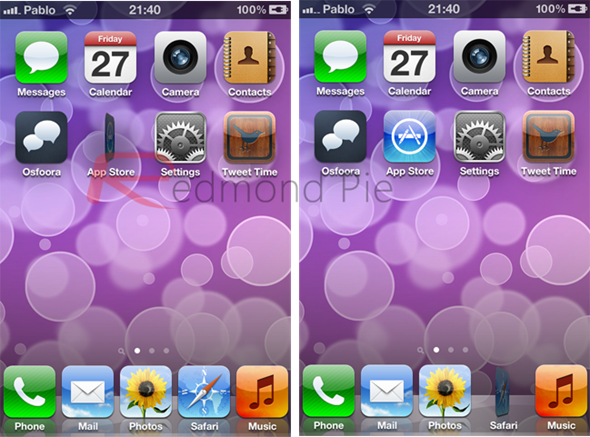 Limneos might be better known to some as the developer behind CallBar and Scrolling Board and a number of other successful tweaks. It seems that with the release of RandomFlip he set off something of a trend as in the last month or so we have seen a number of developers follow suit and release tweaks which build upon the same basic aesthetic change that he introduced as part of his daily challenge. RandomFlip may not be the most functional or exciting modification you will ever see on iOS, but it serves it purpose extremely well – which is to add some lighthearted fun to your SpringBoard.

RandomFlip is available free of charge on the BigBoss repository and is compatible with the iPhone, iPod touch and iPad.