For years, analysts, commentators and general tech fans have discussed the idea of Apple bringing a budget iPhone to the fore, but only this year does it finally appear as though such a device has a real chance of making its long-awaited debut. Talk has been particularly rife over the past three or four weeks, with several leaks of the supposed front and rear panels having surfaced throughout the blogosphere, and taking into consideration the current rumor and speculation, T3 has come up with a particularly beautiful 3D render.

At first glance, it looks very much like the current generation, but on second glance, it.. well.. still looks like the fifth-gen model of Apple’s famed iOS device, often dubbed an ‘iPhone without the phone part.’ Like the latest model of the iPod touch, T3’s render of what it calls the ‘iPhone Lite’ features a 4-inch Retina display, and from the front view, looks almost identical to its cellular-less potential cousin.

T3 has gone with the as-rumored polycarbonate back, which from what we’ve seen of the actual leaks, looks as though it will still retain a degree of Apple’s high-end design motif. Obviously, you’re never going to get the same effect as anodized aluminum, but considering this budget iPhone is designed to be just that – a low-cost, far-reaching handset – it’s a tradeoff worth putting up with for the right price.

The budget iPhone concept measures in at 9.3mm in depth, and although this would make it thicker than the current iPhone 5, it’s still not going to feel unusually rotund. In fact, its thickness is identical to that of the iPhone 4S, and although 2011’s release is not the thinnest on the market by any means, it’s still of a comfortable depth to be held without issue. 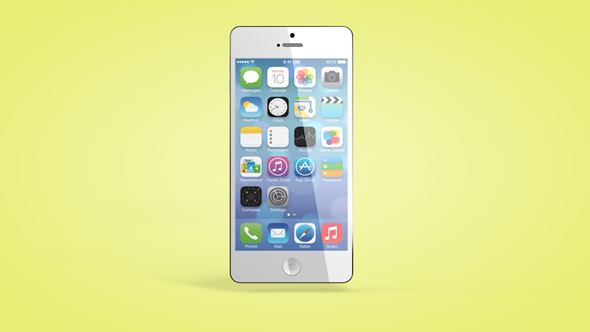 Naturally, there’s a Lightning dock connector at the bottom, and the concept device comes in a plethora of colors, something which we’ve already seen in previous budget iPhone concepts. It has oft been mentioned that the low-cost iPhone would come in a variety of different flavors, and the choices of green, pink, red, charcoal, cyan, yellow and white shown here in this concept render offer plenty of variety to consumers.

At the back, there’s a 5-megapixel iSight shooter, and within the handset’s innards, there’s a dual-core processor, 1GB of RAM and Bluetooth 4.0, as well as 4G LTE.

Certainly, T3’s renders look interesting indeed, and it begs the question – would you buy it? Personally, it looks a bit too iPod touch-like for me, and although I do like the design of the touch, I just like the appearance of the ‘proper’ iPhone just that little bit more.

Thanks, Rhiain for the hat tip!