iFixit has built a reputation on dissecting some of the latest and greatest gadgets to hit the technology scene, and with Google having only announced the Chromecast streaming peripheral a couple of days back, the repairs company has been up to its usual tricks once more. Although iFixit has fried many a fish bigger than the USB dongle-sized device, we’re still excited to see what Google has managed to squeeze within. Take a look for yourself after the break!

As you would imagine from a device so small and compact, there’s not really much to it. Within the plastic housing lies a small motherboard and heat sink, and opening it up was a bit too easy for iFixit, who are accustomed to taking on much more challenging defenses in getting to the guts of a product. After a little fiddling around, the shell was removed, and that was about as in-depth as the ‘teardown’ got.

iFixit usually applies a reparability score to gadgets, offering consumers a general idea of how easy and cost-effective it would be to repair if it were to break down. But since the Chromecast is so incredibly cheap at just $35, iFixit has dubbed it “a throwaway gadget.” As well as being about as cheap as anybody could ask for, its tightly soldered parts mean that, unless you’re a real expert with a steady hand, you simply won’t be able to repair it. 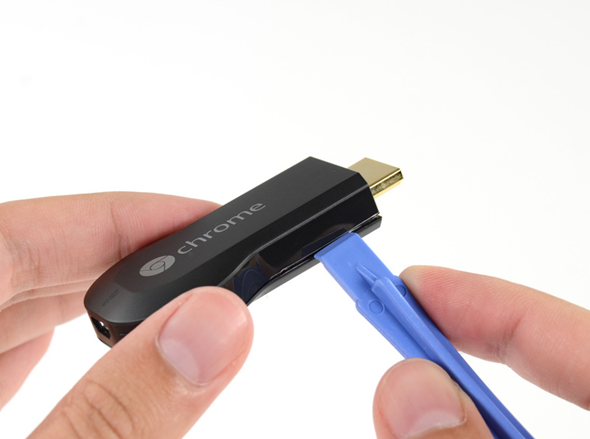 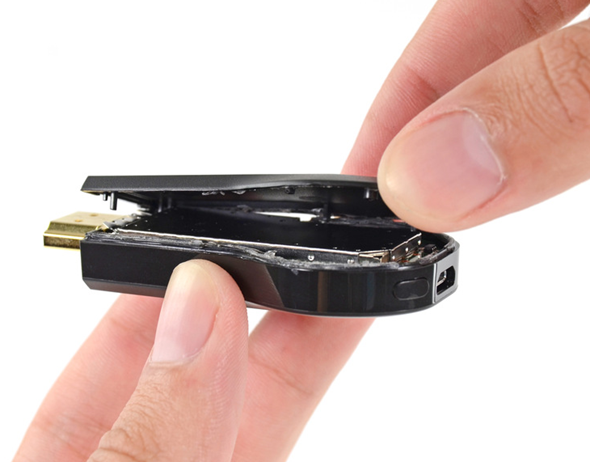 All in all, the teardown was pretty underwhelming, but this could only be expected of a simple HDMI dongle for streaming content from a mobile device to an HDTV. Nevertheless, if you’re true geek intrigued by the specs and specifics, Chromecast packs in an Azure Wave AW-NH387 802.11 b/g/n WLAN, Bluetooth, a Marvell DE3005-A1 SoC and a FM combo module IC. As far as memory goes, there’s 4GB of flash storage, as well as a necessary-but-not-mind-boggling 512MB of RAM.

iFixit summarizes the device as a luxury, but I would say that if you don’t have a Smart TV, this is one of the cheaper ways to turn your HDTV into one. Moreover, since it’s a Google product, you never know how much improvement could be in store moving forward.

But still, it’s cheap, and there’s no harm in buying one just for kicks.