It has long since been common knowledge that Apple could finally be bringing an affordable budget iPhone to the fold. Some years ago, this would have seemed more than improbable, but with the iPad mini arriving late last year and several leaks of the shell having since surfaced in various different locations, its release would now seem almost certain. Michael Kukielka, who some of you may know as the DetroitBORG on YouTube, runs a show-and-tell channel of all things tech, and now, he’s run a pretty insightful video showing the rear shell of the budget iPhone against some of the older models of the Cupertino’s famed iOS device range.

As we know, the budget iPhone is going to be packing a four-inch display, something Apple only finally introduced toward the end of last year with the iPhone 5 and fifth-gen iPod touch. Up until then, Apple had stuck religiously to the 3.5-inch diameter, but with the longer display now popular among iPhone fans far and wide, the company is unlikely to revert back.

As you’ll see in the video, the shiny plastic finish of the rear shell is very much akin to the white iPhone 3GS, to which Kukielka compares his leaked chassis. Despite the materials used being comparable to the legendary iPhone 3GS, the shape and form factor is very much in the image of the current-gen iPod touch. Although a lot thicker and less streamlined than its cellular-less cousin, it does still make for an overall attractive device, and if, as we suspect, this rear shell is indicative of the end product, it certainly wouldn’t break from Apple’s mold of delivering attractive products. 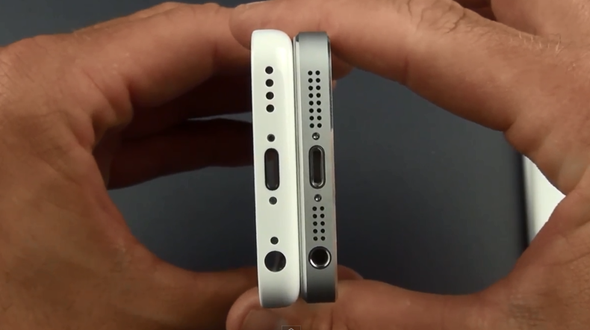 Unlike the iPad, which, despite being a rousing success, suffered a little bit thanks to its high price and lack of Retina display, I foresee the low-cost iPhone being a huge, possibly game-changing entrant to the mobile world. With the iPhone 5 likely to continue retailing alongside the iPhone 5S / 6, consumers will have a noticeably cheaper option to consider, and with this budget device said to be the key to Apple unlocking developing markets like China and India, its sales figures could well be unprecedented.

It was just a few days back when we brought forward a few images of the budget iPhone rear shell compared to the iPhone 5, but nothing beats a good video once in a while!

Thanks, Mohsin for the hat tip!