While Apple did update the MacBook Pro with Touch Bar a few weeks ago, the 12-inch MacBook is still waiting for a refresh, one that has been rumored on and off for a while now.

Apple normally refreshes its miniature notebook in March or April, but with that having not happened in 2018 the rumors are that we will see a new device as soon as September.

That possibility may be turning into a probability with the news that stocks of the 12-inch MacBook are starting to run dry at Best Buy stores with the Core i5 with 512GB of storage completely out of stock in all available colors. The same goes for the Rose Gold version with the entry level 256GB SSD, too.

While it does appear that some stores still have some models in stock this appears to be something of a lottery with stores and the online presence generally low, or completely out of some models and configurations. While stock does appear to be available via Apple’s own web store this could be the first indications yet that stocks are being run down in preparation of a lineup refresh. This has known to be the case prior to past updates of Apple’s products throughout its Mac line, including the MacBook Pro and iMac.

Rumors have Apple set to give almost its entire Mac lineup a refresh this fall, with the iMac, and 12-inch MacBook the most likely to see some action. 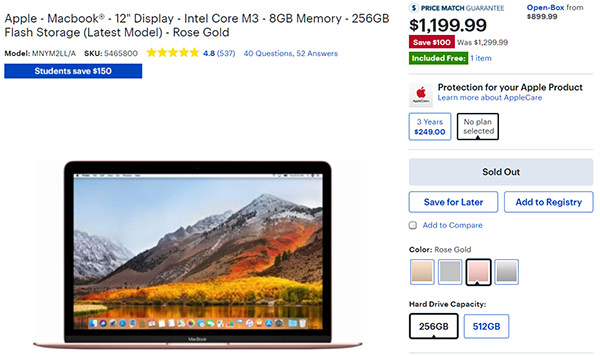 It’s unlikely the iMac Pro will be refreshed but there is also a sizeable chunk of money being laid on Apple finally updating its Mac mini, something that has not happened for a number of years. New iPhones, iPads and accessories such as AirPods are also expected in the coming weeks.