With the news that digital music sales have fallen for the first time ever recently, music streaming services like Spotify and Rdio are becoming increasingly popular. Microsoft’s Xbox Music is a similar proposition to what those aforementioned services offer, with Google also throwing its hat into the music screaming arena via Google Play Music.

Microsoft’s effort has always had one disadvantage over the competition though, and that’s the fact that it needs an Internet connection in order to work. That is, Xbox Music doesn’t allow downloading of content for offline playback.

Thanks to a new update to its iOS app though, that’s no longer the case after the downloading of playlists for offline playback was added to the iPhone app.

The Microsoft Xbox Music app first debuted in the App Store back in September and has today received an update that allows users to download playlists for offline playback, making the service a much better proposition for those that don’t want to, or simply can’t listen to music via the Internet at certain times. Those with small data usage limits might not want to stream music when not on Wi-Fi, for example.

While this update is rolling out to the Xbox Music app for iOS today, the accompanying Android app has yet to receive a similar feature bump. That is hopefully something that will be rectified in due course, though as we’ve found in the past, content companies are more keen to let iOS devices store content for offline playback than they are Android, partly due to the increased risk of having that content taken off the device for pirating purposes. 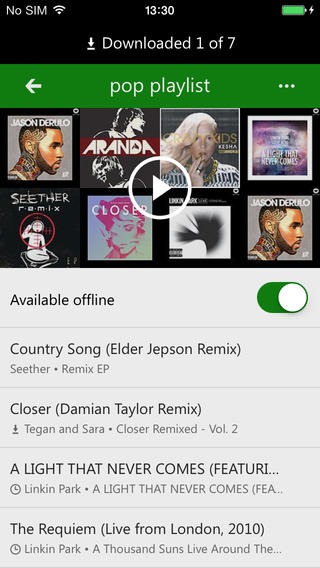 While it may cause a delay in offline playback coming to the Android app, piracy has often been used as a lame reason for developers to not offer Android apps parity with their iOS counterparts. We’re sure that’s not on the cards here, though.

Microsoft’s Xbox Music app allows the streaming of music across both iOS and Android, as well as offering a Web player to compliment its Xbox, Windows and Windows Phone offerings.

You can grab the latest update from the link which we’ve embedded below.

(Download: Xbox Music for iPhone on the App Store)