WhatsApp and Facebook are testing a new feature that further leverages the links between the two. The feature, which allows users to share their WhatsApp Status on Facebook, Instagram, and more is currently being tested.

While not used by everyone, WhatsApp Status works similar to Stories, which makes the syncing between Facebook and Instagram make particular sense. Short videos and images are placed end-to-end to create longer videos, allowing for an extra level of expression that standard text doesn’t allow. Stories are particularly popular on Instagram after the app borrowed it from Snapchat.

The good news, according to WhatsApp’s statement to The Verge, is that the syncing doesn’t link your Facebook and WhatsApp accounts in any way. Instead, standard Android and iOS data-sharing APIs are used to make the magic happen. That essentially means that neither services are doing anything that others wouldn’t be able to implement.

Even though that many be the case, this move will further fuel concerns that WhatsApp and Facebook are becoming more linked together, something that was feared when Facebook picked the company up in 2014. Facebook has recently said that it would be making it possible to send messages between Facebook, WhatsApp, and Instagram in the future although no timescale was given for that to happen.

Given the end-to-end encryption that made WhatsApp’s name, offering the move to open it up to other Facebook platforms isn’t one that many are keen to see happen. 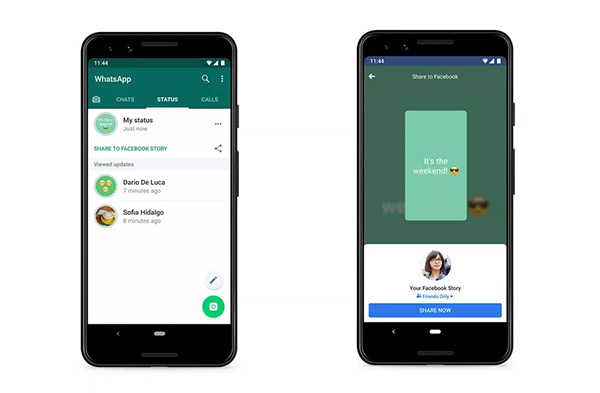