The Apple Watch seems to be the latest plaything of choice for developers and tinkerers looking to get to grips with something new and intriguing. We’ve already witnessed prominent developers and community figureheads like Adam Bell, Hamza Sood and Steve Troughton-Smith hacking Apple’s smartwatch to run truly native apps. Now it appears to be the turn of developer Nick Lee, who has chosen to use his Apple Watch to run an operating system that was first released for the Macintosh nearly two decades ago.

Regardless of whether or not you actually see the point in using a cutting edge piece of technology like the Apple Watch to run Mac OS 7.5.5 from 1996 is besides the point itself. The fact that Lee actually managed to have the idea, and then subsequently execute it, is a hugely impressive achievement in itself. 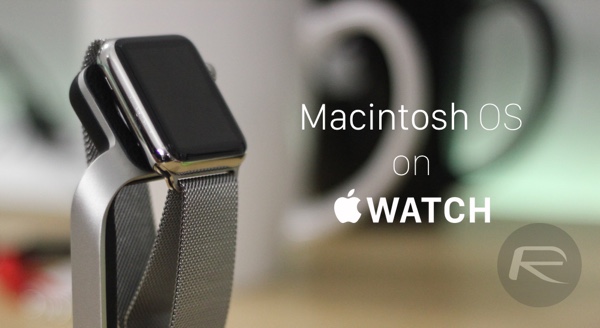 For those that may not have an existing relationship with Apple stretching back that far, the original Mac OS 7.5.5 was released on September 27, 1996. That’s some serious backwards compatibility hacking right there.

In order to get this up and running, Lee had to utilize his Apple Watch running a beta version of watchOS 2. He also had to make use of the Mini vMac Macintosh Emulator, which is predominantly provided to allow more recent devices to run earlier versions of software that was originally designed for much older Mac machines. We aren’t sure that it was exactly designed for this purpose, but taking a piece of software initially designed to run on an Intel PowerPC and manipulating it to run on one of Apple’s most sophisticated devices is undoubtedly a feat of technical brilliance.

The embedded video provided by Lee shows the software launching and executing on the small screen of the Apple Watch. The iconic Mac OS splash screen looks pretty awesome on the tiny display, but the whole experience can’t exactly be described as efficient. As you might imagine, the UI availability is limited and tapping and interacting with various aspects of the software is extremely laggy and slow to respond.

Still, it’s an Apple Watch, running Mac OS 7.5.5 from two decades ago. Just get your head around that.