Whenever Apple introduces new and exciting functionality into the latest version of iOS, it’s always a race to see who can come up with the most innovative use of the new features. The iOS App Store is so crowded that it becomes almost a necessity for developers to come up with an app or idea that harnesses any new technology found within the latest SDK in an effort to become relevant and visible in the packed marketplace. However, some developers, like Adam Bell, love to experiment and have fun with whatever Apple introduces. Ladies and gentleman, we bring you the iconic Doom game playable from within Picture-in-Picture mode in iOS 9 for iPad, courtesy Adam Bell.

After proclaiming that the iOS 9 Picture-in-Picture, which originally is meant for videos and video calling apps like FaceTime, mode is “super boring,” Bell decided to go on a tinkering spree to get something up and running that’s a little more fun and entertaining. He has a knack of pulling off such things, as he’s one of the developers who worked along Steve Troughton-Smith and Jay Freeman to get a nano file browser running natively on watchOS 2 as well as hacking around to force the beautiful Canabalt game to run on the Apple Watch, all without the need of a jailbreak. 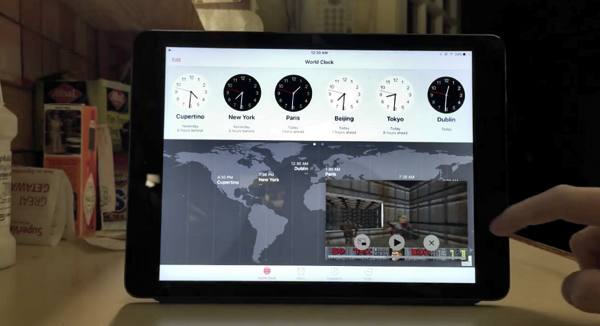 This latest “modification” sees Bell extend the functionality of the iOS 9 Picture-in-Picture mode to allow Doom to be played from within a PiP window. What makes this even more impressive and commendable is that all the work was undertaken and achieved using entirely public APIs that Apple serves up to developers within the latest iOS SDK. Theoretically, there should be nothing to stop this from actually processing through the App Store vetting process and making its way onto the official public domain. Although we imagine the App Store review team will come up with some reason to reject such a creation.

Of course, while the challenge was undertaken using public APIs and was undeniably successful, playing the game would be an entirely different matter altogether. Plus, it’s likely that the Picture-in-Picture APIs won’t extend beyond Apple’s latest hardware in the second-generation iPad Air 2 so it would make it fairly limited in its scope.

Still, as always with developers like Bell, it’s great to see a little bit of thought being put into how the capabilities of the iOS SDK can be extended beyond the norm.