Sometimes things don’t need to have actual uses in order to be absolutely awesome. Take a Flappy Bird clone running on an Apple Watch as a prime example of that. We don’t want to play it on our wrists, but that doesn’t mean that the idea of having the choice to do it doesn’t make us feel all warm and fuzzy inside.

Ever since Apple released watchOS 2 to developers during the WWDC opening keynote last Monday, those same developers have been poking and prodding it in order to see how it ticks. As it turns out, even though watchOS 2 allows developers to run apps natively on the Watch itself, developers don’t have access to UIKit and SpriteKit and instead must stick with WatchKit. That hasn’t stopped developers like Hamza Sood, Adam Bell and Steve Troughton-Smith from having a bit of fun, though. 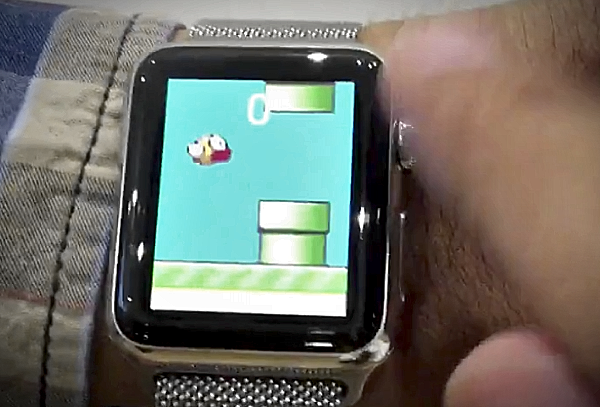 That fun initially resulted in an app truly running natively on Apple Watch by Steve Smith, followed by Canabalt being shown running by Adam Bell a few days ago, and today Hamza Sood released a video – on Twitter – showing his own Apple Watch running a cloned version of the famous Flappy Bird game. What makes the game so impressive is that it incorporates touch control and control via the Digital Crown. It may still not be as easy to play, but that doesn’t mean the fact it’s possible is any less cooler.

Here’s a Flappy Bird clone running on the Apple Watch:

Apple’s release of watchOS 2 and iOS 9 betas last week have given developers their first crack at making real Apple Watch apps rather than the half-baked version we have had to live with over the last few weeks. While we still don’t know just what developers will come up with now that they have access to the Apple Watch’s hardware directly, the possibilities are certainly there for some highly responsive apps that should put some of the current offerings to shame.

Expect to see the likes of Sood push the envelope over the coming weeks as they start to truly get to grips with watchOS 2. And we’ll definitely keep you updated as we spot more great things developers are doing with watchOS 2 so stay tuned to our coverage.