In continuation of its Droid Does advertising campaign from last month, Verizon in pursuance of anti Apple campaign, has launched yet another ad war against iPhone, which is totally Droid centric, but this time a little personal on Steve Jobs as well. Although the ad is Droid specific, it fails to express or tell any strength or specialty of Droid feature wise, and is rather totally focused on highlighting and targeting the weakness of iPhone. Shown below is a page printed in the recent edition of Sports Illustrated magazine with the following text. 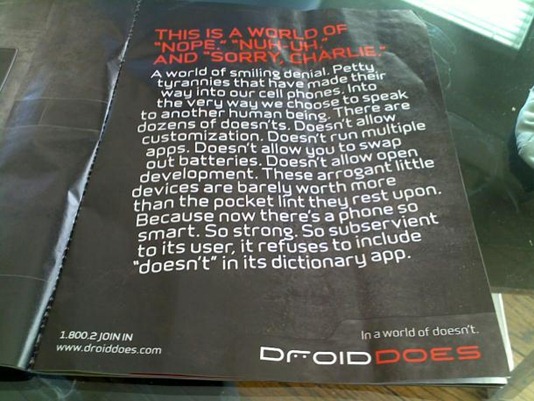 A world of smiling denial. Petty tyrannies that have made their way into our cell phones. Into the very way we choose to speak to another human being. There are dozens of doesn’ts. Doesn’t all customization. Doesn’t run multiple apps. Doesn’t allow you to swap out batteries. doesn’t allow open development. These arrogant little devices are barely worth more than the pocket link they rest upon. Because now there’s a phone so smart, so strong. So subservient to its user, it refuses to include “doesn’t” in its dictionary app.

In a world of doesn’t. Droid Does.

CNET has opined that Verizon this time has gone a bit too personal by expressing its feelings about the negotiations that they might have had with Apple to bring the iPhone to Verizon, and consequently attacking Steve Jobs himself for the role he might have played in these negotiations. "Petty tyrannies have made their way into our cell phones" is a sentence which by no means is directed towards iPhone, but to an individual. Similarly, using word like "arrogant" in the phrase, "these arrogant little devices", makes it no doubt a personal remark obviously against someone who may not be to their liking. Steve Jobs? Your guess!

The way Verizon is spending its time and money in an effort to let down Apple and the iPhone through this ads war makes them look desperate to not have a phone like the iPhone. Sure they have got the two Droid phones but it is still too early to judge them as a success at this point of time. Apple on the other hand is cruising by selling iPhone’s like hot cakes. It will be interesting to see how Apple responds to these ads. Knowing how they do it on the PC front with “Get a Mac” ad campaign, you can expect them to come back hard at Verizon and Droid in their upcoming iPhone ads.