Sony Ericsson’s official page for the Xperia X10 has listed February 2010 as the expected launch date for its new Android-powered handset. This news shouldn’t come out as a surprise since Sony Ericsson previously made it pretty clear that X10 will hit the shelves in the first quarter of 2010. Xperia X10 is Sony’s first entry in the Android space which introduces a new user interface platform called UX (codenamed Rachel) and new apps dubbed Mediascape and Timescape. This new user experience attempts to provide a centralized spot for all your communications, allowing you to view your tweets, photos, emails and conversations from a single spot. 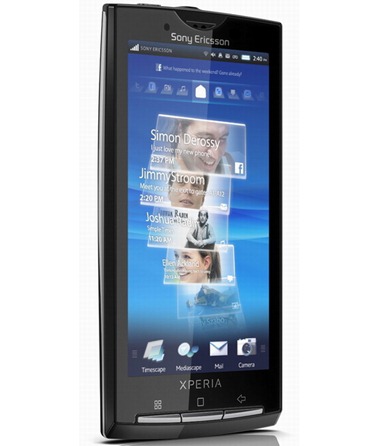 Xperia X10 is touted as the phone that provides the most human and intuitive user experience yet and it runs on Android with a beautiful 4 inch capacitive multi-touch display. X10 is also the first Android powered phone to feature an 8.1 megapixel camera with up to 16x digital zoom. Camera is equipped with Smile detection, Touch focus and Send to web features with excellent image capturing and video recording capabilities. Video recording capability of X10 can be seen in the video attached below.

Xperia X10 is powered by the same extremely fast 1 GHz Qualcomm Snapdragon processor which currently only HTC HD2 has to offer. It has 1 GB of onboard memory and will ship with 8GB microSD card at launch. You can register yourself at this page here which will notify you whenever Xperia X10 is available for pre-ordering in your area.

As things stands today with the two Droid phones, and the way things are looking for the future with Xperia X10, Google has every reason to celebrate the smooth marching of its Android platform.