Although the car crash of Woods was not that severe, it was the post accident saga that exposed the number 1 golf player in the world having illicit relations with Rachel Uchitel, Jaime Grubbs, Jamie Jungers, Kalika Moquin and many others. His position has become very vulnerable even at home front. The superstar has been compelled to take a break from golf, for the time being atleast. 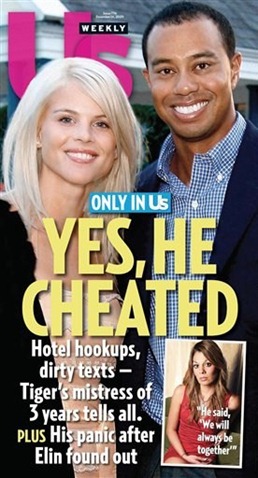 Jaime Jungers, one of the alleged mistress of Woods while appearing on a Dateline NBC Special  in “The secret life of Tiger Woods” stated that she has no regrets about her relations with Tiger Woods. She is fully convinced that she owes no apology to Elin Nordegren, the wife of Tiger Woods. Jungers 26, while replying to questions, explained her position in the following words:

No, I don’t, I feel like that’s his– that’s his business. Everybody makes mistakes. This wasn’t something that I did yesterday or a month ago or a year ago. This was years ago. I was younger. And I’m not saying that what I did then was right. But– I’m certainly not gonna say that it was wrong. I believe everything happens for a reason. And– no, I– I don’t– I don’t believe that I owe her apology– an apology. I mean, I– I’m sorry for everything that’s going down. And what may happen to … their kids’ future, you know? But no, I don’t– I don’t believe I owe her an apology. No.

She believes that her secret relationship with Woods developed from lust to love. She said that she loved Woods and she still loves him.

The above confession of Jaime Jungers amply proves that Tiger Woods has cheated on his wife, not once but several times.